Out of Many, One (Or, what is the "purpose" of Luxembourg?) 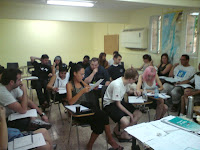 The ethnic, national, and racial diversity in my Ulpan class is a legacy of the cultural diversity and far-flung nature of the Jewish Diaspora: it is said that Jews have come to modern Israel from 103 countries and speak more than 70 different languages. In my class alone, there are Jews from Ethiopia, Peru, Brazil, Chile, Venezuela, Russia, Belarus, Moldova, the UK, Italy, Germany, and the U.S.

Because our instructor uses English while conducting class, she will, throughout the day, when explaining something of special importance, often ask the Russian speakers in the class who are fluent enough in English to translate what she said for the Russian non-English speakers, and will ask the same of the Spanish speakers. In the case of those who speak other languages that don't have a companion national compatriot in class, they have nobody else to rely on other than their often shaky grasp of English and whatever body language and other non-verbal communication the instructor uses. For instance, the Ethiopian in our class, Hanoch, who speaks a little English, has nobody else in class to ask for assistance, as nobody speaks, or in any way understands, Amharic.

However, on the first day of class, when we were all gathered into the assembly room for an introduction to the Ulpan and to the staff, and we sang Hatikvah, Hiney Ma Tov, and Oseh Shalom, most everyone was familiar enough with the tradition and spirit of the songs, if not the Hebrew lyrics, that it was as if we were all speaking the same language - the language of the dream we all had to live in Israel, to make Aliyah, and to fulfill the ideals articulated in Hatikvah of being "a free people in a free land."

The unity of the Jewish nation, which often eludes many Jews and non-Jews alike, the common narrative we share - despite our differing languages, cultures, religious affiliations, and nationalities - of thousands of years of struggles, dreams, and destiny, makes Israel, by almost any measurement, among the more unified nations in the world.

(Indeed, in a 2009 survey, Some 88% of Israel's Jews are proud to be Israeli, and 95% of them are willing to fight for their country, according to the patriotism survey, making Israel among the most patriotic nations in the world. Indeed, such results places Israel second only to the United States in surveys measuring patriotism and overall sense of national purpose. While Israelis, like citizens in all countries, differ on my things, there simply is no crisis in Israel on the meaning and significance of being an Israeli.)

Israel is to certainly be admired for its progressive nature (its freedoms that many other nations can't soon hope to enjoy) but the one thing that is unique about Israel is, as Herzl says, its role as "guardian of the Jews". There is no other nation in the world that can be counted on to, every time, come to their rescue and risk lives and treasure to save Jews from peril all over the world. Lets not forget that only a few years ago, Israel devoted a decade of dangerous but successful work to rescue the Jews of Ethiopia, saving tens of thousands of lives that would have been lost. (No other nation in the world has ever taken such risks to rescue thousands of black Africans from harm, and allow them to become citizens.)

And, there is no other nation in the world that will devote its energies to fostering (and protecting) Jewish culture, the Hebrew language, and our unique religious identity, and to ensure a society where Jews don't have to compromise their unique identity in order to "fit in" to society.

Yet, there are those who oddly question the purpose of the Jewish nation, and who even shamefully suggest that we should cease to exists, or that the justification for our existence is tied merely to some sort of sympathy for our suffering of the Holocaust and is currently tenuous at best, for which I want to ask one question: What is the purpose of Luxemborg? Though I'm being a bit sarcastic, it is truly remarkable that Israel, a nation with such a specific purpose and unique, unambiguous, and enduring identity - of all the nations of the world - is constantly asked to defend its right to exist, when, really, how many of us can speak with any degree of eloquence about the purpose of the other 191 nations in the world. Tell me, go down the list of nations accepted by the U.N., and tell me what is the "purpose" is of each. While Muslims can live in a way consistent with their traditions in over 50 nations who are self-described "Mulim states", and Christian can live comfortably in dozens of states whose identity is at least "de facto" Christian, if not outright codified as such, there is only one Jewish state in the world - the only one that there will likely ever be.

My guess is that if the New York Times Magazine had a long essay about some tiny, obscure tribe in South America or Africa with a unique language, culture, and history, whose history extends several thousand years, and who is now in danger of being vanquished by external enemies and international indifference to their plight, readers would decry the situation and express righteous indignation over the possible collapse of a culture with such a long and proud history. I also bet nobody would question what their reason for being is. Indeed, such a question would most likely be thought by such readers to be imperious, arrogant, and callous.

The fellow Olim in class with me certainly struggle with understanding and conversing in Modern Hebrew, and we get frustrated while we attempt to negotiate the intricacies of a new (and at times maddening) government bureaucracy, and an entirely new culture. And, many of the younger Olim must gather their strength to eventually serve in a national defense force that will likely have to deal with yet another military confrontation during their time of service. But, what keeps us going is that we have absolutely no doubt as to why we struggle. In a Western world increasingly unable to grasp the details, yet alone the significance, of even the most recent history, the traditions and rhythm of Jewish life allows Israelis to see beyond the now, and to see the big picture, the context, and to view the minutiae of everyday events through the powerful lens our people's history.

Paraphrasing Ze'ev Maghen, being Jewish means that, throughout our history, we were all there. As the Passover Haggadah implores us that, “In every generation, a person must see himself as if he personally left Egypt," so, too, can Jews look at the other major events of our history, the festivals, and the tragedies, as if WE were actually there. As Ze'ev Maghen said:

[Its as if] WE ALL participated in what they did..fought their battles, felt their feelings and learned their lessons. We tended flocks with Rachel...and toppled the walls of Jericho with Joshua...brought the house down on the Philistines with Samson, vanquished the might of imperial Persia with the wisdom and beauty of Esther; we were with Judah the Maccabee at Modi’in, with the Zealots at Masada, with Akiva in the Roman torture chamber and with Bar-Kochva at Betar; we were crucified for refusing the cross in the Crusades, and were turned into ashes for our stubbornness at the autos-da-fé; we were exiled from the shores of Spain by Isabella, and chased down and raped by the hordes of Chmielniki...went out to Safed’s fields to greet the Sabbath bride with Luria, and went in to Galicia’s huts to seek the ecstasy of the fervent Ba’al Shem Tov; we fled the Black Hundreds across Russia’s taiga, and were welcomed by Lazarus at the gates of Ellis Island; we filed into gas chambers at Bergen Belsen; we parachuted into Hungary with Hanna Senesh, and fought back at Warsaw with Mordechai Anilewitz; we revived our dead language, resurrected our sapped strength...and returned to ourselves...renewed the lapsed covenant, and arose like a lion and hewed out your freedom on the plains and the mountains of our old-new land. Throughout all this, we were there with them. We are members of a unique, extended family...partake in a four-thousand year-long journey of savage struggle and jubilant exultation, of unimaginable sacrifice and ineffable beauty, an adventure recently rekindled in a phoenix-like flash of incandescent splendor - the creation of the modern state of Israel - the likes of which human history has never seen."

Ok, one more time, please tell me what the national purpose of Luxembourg is.
Posted by Adam Levick at 9:36 PM