My visit to the settlement of Eli, in the West Bank My tour today included the settlement of Eli, a few miles from Ariel, stretching over a vast area situated on a mountainous topography, including a cluster of neighborhoods with a total of 3,000 residents. The center of life in Eli is the pre-military academy that attracts religious students from all over the country. Maj. Ro'i Klein, an Eli resident and hero of the Second Lebanon War, was killed when he lept on a grenade to save his soldiers.

Quality of life is not a vague concept at Eli. There are cultivated gardens, breath-taking mountain views, the shades of its olive trees, and a well-kept regional sports center, which includes multi-purpose playing fields, a tennis court, a work-out facility & swimming pool. Eli provides health services, a small shopping center, and post office. Synagogues and ritual baths are scattered around the neighborhoods.

Eli is also only 30 minut 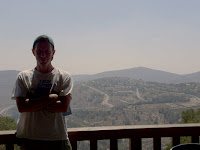 es from Jerusalem. And, the relatively short distance from Israel's large centers of employment, particularly the Industrial Parks in Barkan and Ariel, allow direct access to and from work. The town is at an elevation of about 700-800 m. above sea level, with a climate similar to that of Jerusalem.

Kobi Eliraz, who is the head of Eli's local council, spoke to our group with an immense sense of pride about his community. Eliraz is disappointed by most Israelis' refusal to cross "the eastern threshold of Ariel," after which the real "settlements" begin. He wanted to also make it clear that he recognizes the authority of the state, and if it wants to evacuate him from Eli, he says, he'll fight the decision - but peacefully go along with it. Indeed, that sentiment was echoed by others we spoke to.

One of the more interesting things I discovered was that the population of Eli includes a significant number of secular Israelis - inconsistent with the caricature of the settlers as uniformly religious. While I obviously wasn't able to speak with a large number of residents here, my sense from speaking to the community leaders is that Israelis are drawn to such settlements for a number of reasons. The beauty of the area and relative affordability of home ownership is a factor for some; the allure of living in close-knit community is also a draw, as well as the feeling, which I heard echoed by Eli residents - as well as the residents of a tiny outpost near the Jordan Valley that I visited later in the day - that a pioneer spirit was partly at play.

I couldn't help but think of the American families moving to remote unsettled areas, in the19th century, as the borders of their nation gradually expanded westward....drawn by cheap land, the promise of a fresh start, and, no doubt such pioneers thought they were entitled to do so either by political right or by providence. Likewise, Israelis who have opted for these remote hillside communities are also driven by perhaps a sense that, as the original Jewish homeland in Eretz Israel included areas in what we call today the West Bank (Judea and Samaria), they too have a divinely inspired right to settle the areas. But, as the West Bank was captured by Israel in a defensive war, and not, as in the American example, in the context of expansionist conquest, they no doubt also feel they have a strong moral and political claim to the land.

And, while I'm very sympathetic to the settlement community, and am saddened by the degree to which they are often demonized (even by Israelis and Jewish supporters in the diaspora), and further feel that Israel's reluctance to cede more land to the Palestinians, after their experience in Gaza, is completely justified, I also feel that, for the sake of a TRUE and LASTING peace, evacuating such settlements may eventually be the the only responsible option. Not a fair option, mind you, but, as politics is rarely about perfect justice, merely about decisions about which of several options will cause the least harm, if the decision is between holding onto such settlements at any cost, and ceding the land for genuine peace, I think the choice is a clear one.

Email ThisBlogThis!Share to TwitterShare to FacebookShare to Pinterest
Labels: Settlements