My visit to the hilltop settlement of Kida 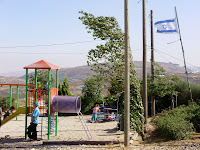 The West Bank settlement of Kida, which I visited last week, is northeast of Jerusalem, and is part of the Benyamin regional council, which covers 42 Israeli settlements in the southern Samarian hills of the West Bank. The seat of the council is Psagot. (The council is named for the ancient Israelite tribe of Benjamin, whose territory roughly corresponds to that of the council.) Kida is situated on a hilltop that is half a mile above sea level. From Kida there is a view to the east that includes the Gilead area that was home of Elijah the prophet, the Jordan Valley, and to the West the communities of the Shiloh block. Kida is surrounded by vinyards and olive orchards, a lookout from where Hermon can be seen, and ample hiking trails.

Twenty families live in this unauthorized settlement, which was established only four years ago, and though this community will almost certainly be evacuated when, or before, a final peace agreement is reached with the Palestinians, the spokesperson for Kida, Tzofia Dorot, spoke optimistically of a future for her community which would include such amenities as a community center, a childcare center, a coffee house, and permanent housing for a community she hoped would grow to 400 families.

While the residents of Kida are, unlike the larger and more diverse community of Eli, uniformly religious, Tzofia was quite clear that, in the event that the government decides to evacuate their community, their members would, "naturally", obey the democratic wishes of her nation. In fact, while reasonable people can indeed conclude that, given the near certainty that the borders of any future Palestinian state (in whatever form it takes) will certainly include this hilltop community, such settlement construction is counter-productive, one other thing seems clear: the caricature of the settler, seen in much of the Western media, as violent religious fanatics wishing to obstruct peace seems more and more like the stuff of fiction.

To put the territorial dispute with the Palestinians in some much needed perspective:

By the end of the Six Day War, in June 1967 - a defensive war that Israel tried desperately to avoid - Israel had captured enough territory to more than triple the size of the area it controlled, from 8,000 to 26,000 square miles. The victory enabled Israel to unify Jerusalem and Israeli forces had also captured the Sinai, the Golan Heights, the Gaza Strip and the West Bank.

Israel subsequently returned all of the Sinai to Egypt, and all of the Gaza Strip was given to the Palestinians, which involved the peaceful evacuation of Israeli settlers from these territories. To date, approximately 93 percent of the territories won in this defensive war have been given by Israel to its Arab neighbors as a result of negotiations, which clearly demonstrates Israel's willingness to trade land for peace. So, while I'm willing to admit that, political realities being what they are, I doubt the long-term viability of settlements so far from the Green Line, such as Kida, to view such small communities as representing a major obstacle to peace with the Palestinians is an assumption simply not supported by history. 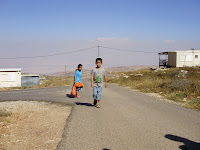 You have really great taste on catch article titles, even when you are not interested in this topic you push to read it