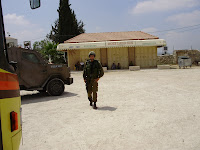 The group tour I went on yesterday, of two Jewish settlements in the West Bank, began with what was going to be a relatively brief stop a few miles north-west of the W. Bank city of Shechem, at the sites containing ruins from the ancient "hill of Shomron,". It is an oblong hill, with steep but not inaccessible sides, and a long flat top. From what I read, Omri, the king of Israel, purchased this hill from Shemer its owner, and built on its broad summit the city to which he gave the name of "Shomeron", i.e., Samaria, as the new capital of his kingdom 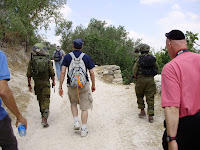 This city, after many changes of sovereignty, was given by the emperor Augustus to Herod the Great, who rebuilt it, and called it Sebaste (the Greek form of Augustus) in honour of the emperor. The area is now represented by the hamlet of Sebustieh, containing about three hundred Arab inhabitants. The ruins of the ancient town are all scattered over the hill, down the sides of which they have rolled. Remains of the old amphitheater, as well as the 100 or so shafts of what must have been grand Corinthian columns are still standing.

Due to security problems - we were informed that there are occasionally rocks thrown at visitors to the site and other hostile acts - the area isn't visited too often, but our group was able to get permission from the military, who provided several IDF soldiers (accompanied by two light armored vehicles) for our tour, who met us a military check point nearby, and accompanied us for our tour.

An hour or so into our tour of the ancient ruins, we were told that, due to security problems in the area where we started our tour, we would have to climb down a different way from the high point of the hill, using a much steeper path to a new location where our bus would meet us. Several of the people on our tour were elderly, and a few walked with some difficulty, so the soldiers, as well as myself and some other younger members of our group, assisted those who needed help climbing down. After much effort, we all made it down safely, and were accompanied out of the town by our military escorts.

Though we were surprised at the time that they forced us down this very difficult path, what we didn't realize at the time was that the security concerns were quite real, involving young Palestinians throwing rocks and Molotov cocktails in the general direction of where we began our tour, prompting the IDF to alter our original plan.

We obviously all owe the IDF soldiers quite a bit of gratitude for the confidence and professionalism they displayed in assessing and effectively responding to the danger we faced.
Posted by Adam Levick at 8:22 PM