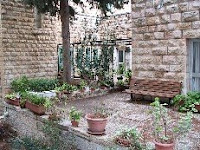 I visited my new school today, where I'll be studying Hebrew for five hours a day, five days a week, for the next several months - known as Ulpan Etzion.

Ulpan Etzion's new buildings - it recently moved to the East Talpiot neighborhood at Beit Canada - are built in the trademark Jerusalem stone, interspersed with gardens and a playground. Catering to young adult new immigrants from academic and professional backgrounds, the Absorption Center’s halls are abuzz in a variety of languages, with the comings and goings of new Israelis from around the world. The Ulpan is designed to provide new immigrants with the opportunity for social networking, Hebrew study and a supportive initiation into Israeli life and society. Though I'm living off campus, so to speak, the Ulpan maintains dormitory style housing and a Kosher cafeteria for those who choose to live there during their months of Hebrew study.

Established in 1949, shortly after the State of Israel was founded, Etzion was the first Hebrew ulpan in the country where, by all accounts, it set a model for Hebrew language education that was used across Israel. Today it is the only absorption center in Israel specifically designed for young, single new olim (immigrants), who must hold a bachelor's degree to qualify for a place. Staff and students all seem to agree that the intimate atmosphere and high quality of teaching, have made it a sought-after destination.

I must admit to s 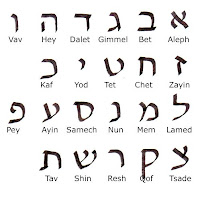 ome trepidation about the prospect of learning a new language after all of these years, as - anyone who knows me won't be shocked to hear me say - I'm not generally the fastest learner. I mean, what I do know I know well, but, lets face it, not everyone has the same learning curve and, while I don't at all have any self-doubt when it comes to what I do know....those topics I feel more than comfortable discussing, relating to human nature, politics and the world in general, for some reason I have never been able to assimilate new information quickly. And, while I am glad that I, at least, have chosen the Ulpan with such a stellar reputation, its going to take a lot of hard work to master this old language that Elizer ben-Yehuda modernized and reintroduced to the Jewish people as a modern language more than 1700 years after it disappeared as the spoken language of the Jews.

Indeed, Hebrew's change from a liturgical written language to a spoken language of official status in the State of Israel was not purely a linguistic process. The revival of Hebrew was part of an ideology of modern Zionism, used as a medium of revolt and a symbol of unity for the national liberation movement of the Jewish people.

By most accounts, the process of Hebrew's return to regular usage is unique; there are no other examples of a language devoid of native speakers becoming a national language with millions of first language speakers. Like many of the giants of Zionist history whose stories I've become more intimately familiar with since my Aliyah - like Herzl, Ben Gurion, and others - I am quite humbled by ben-Yehuda's example of dogged determination in the face of tremendous odds. Yehuda once said:

"For everything there is needed only one wise, clever and active man, with the initiative to devote all his energies to it, and the matter will progress, all obstacles in the way notwithstanding... In every new event, every step, even the smallest in the path of progress, it is necessary that there be one pioneer who will lead the way without leaving any possibility of turning back."

So, in the face of such vision and strength of purpose, it will be hard for me wallow in self-doubt about my capacity to learn Hebrew for too long, and will try to remember that I'm here after all, not just to experience Israel, but to become an Israeli.

Thanks for your advice!

Thank you for your post, i am learning mandarin, but i need study english more.