A Protest at Ben Yehuda 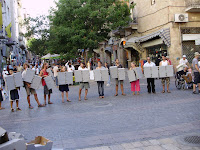 This is a picture I took today at Ben Yehuda Mall (a crowded tourist destination in the center of town) of a protest against Israel's a security fence (or "Wall").

The barrier in question consists of a network of fences and vehicle-barrier trenches (with less than 5% of the barrier consists of concrete walls) erected mostly along the 1949 border between Israel and Jordan, but diverging in many places to include on the Israeli side several of the highly populated areas of Israeli settlements in the West Bank such as East Jerusalem, Ariel, Gush Etzion, Emmanuel, Karnei Shomron, Givat Ze'ev, Oranit, and Maale Adumim

As typically is the case in democratic Israel, the protesters, many of whom were clearly from outside the country, were not in any way bothered or harassed by police or other security personnel, nor by the majority of those citizens and tourists on the mall who no doubt strongly support the security fence - seeing it as one of the key factors behind the dramatic decrease in successful terrorist attacks over the past several years.

Indeed, Israel has demonstrated that in the areas where the barrier was complete, the number of hostile infiltrations has decreased to almost zero. Even Palestinian militants, such as a senior members of Islamic Jihad, have confirmed that the barrier made it much harder to conduct attacks inside Israel.

Many who protest the fence claim it is an attempt to annex land and has the intent or effect to pre-empt final status negotiations, and severely restricts Palestinians who live nearby, particularly their ability to travel freely within the West Bank and to access work in Israel. To this, a few things need to be said. First, the rout of the fence can be altered at any time and Israel's withdraw from Gaza has demonstrated that they will not only adjust their borders in the interest of peace, but will undertake the painful task of evacuating its own citizens to achieve such ends. Second, democratic Israel, with its independent judiciary, continues to take the needs of Palestinians seriously, and indeed, On June 30, 2004, our Supreme Court ruled that a portion of the barrier west of Jerusalem violates the rights of Palestinians, and ordered 30 km of existing and planned barrier to be rerouted.

But, I guess the most serious point is, as I've pointed out in the past, critics of the fence, as with critics of Israel more broadly, never offer an alternative to what they're criticizing. If there's another way, other than the security fence, to protect our country from Palestinian terrorists intent on crossing the boarder to kill innocent civilians, I'd be open to it. But, in lieu of such an alternative, I think, in even the most basic moral cost-benefit analysis, the hundres of Israeli lives that have been saved by this fence more than justifies whatever inconvenience its existence causes. (Indeed, countries all over the world have erected such fences at their border - including the United States along their border with Mexico - and it is usually seen as a reasonable, non-lethal, approach to enhancing border security.)

About a half hour into the protest, I saw a few Israelis peacefully engage the protesters, attempting to debate with them the merits of the fence.
Posted by Adam Levick at 7:00 PM