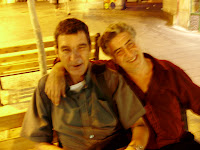 Its not everyday that two drunk Palestinians sit down on the bench you're occupying at Ben Yehuda, share their bottle of wine with you, and discuss...the Israeli-Palestinian conflict, as well as the ideas of Spinoza, Neitze, and Camus. Mind you, I'm typically quite skeptical when strangers approach me in public wishing to socialize, but I had the sense that Nadi and Razy were harmless...simply socially "emboldened" by a night spent out on the town drinking - an instinct that turned out to be correct.

The conversation, that lasted perhaps a half hour, was at times spirited, always friendly, and, in its civility and respect, transpired like something out of a video produced for some sort of "peace and understanding" group (and, no, I'm not using "peace and understanding" in the pejorative). And yet, much of their discourse laid bare so much about the Palestinian narrative that holds them back politically, and reaffirms my skepticism of any real hope for peace in the near future.

While their English was broken, and there was much that I'm sure I missed, I was able to understand when Razy opened the conversation by stating that he is a Palestinian, living in Jerusalem, and is a "refugee" (from '48, I assumed). While I'm not sure where his original home was, or the conditions which led to his being displaced, by Razi's moral logic, Jews who lived in East Jerusalem prior to the war of Independence, and were expelled by the Jordanians when they took control of that part of the city by the end of the war, and made it to some other city in Israel, were/are also refugees. For that matter, the thousands of Holocaust survivors who fled Nazi occupied/controlled territory in Europe, and ended up emigrating to either the U.S. or to Israel should, by that logic, be considered "refugees." There were tens of millions of refugees from wars in the 1930s and 1940s, masses of people who eventually, after weeks, months, or, at most, a few years, settled someplace else, built roots there, and, quite simply, moved on with their lives. (Not to mention the 800,000 or so Jewish refugees from Arab countries between 1948 and 1967...topic for another day).

The term "refugee" is not only applied to Palestinians, many of whom have been living elsewhere for over 60 years, but is bizarrely applied to their descendants, and their descendants....something that each generation of Palestinians inherit...a victim status that presumably will only be abrogated when they are allowed to return to the homes of their ancestors three generations past, a population numbering 711,000 in 1950, and now, by this law of inherited refugee status, has risen to over four million, as accepted by the United Nations. This "right of return" - the Palestinians "right" to return to Israel proper even if a Palestinian state were to be created for them - if it were ever to be enforced, would quite literally mean the end of Israel as a Jewish state, and indeed use of the term has always been understood to be a euphemism for those wishing to destroy Israel.

But, it was when the topic turned to Mahmood Abbas, Fatah, and Hamas, that this conversation with two moderate and thoughtful Palestinians became especially troubling. When I asked Nadi who he would support in an election for Prime Minister in a newly created Palestinian state - that is, I was trying to get at what kind of government he saw coming into existence...would it be peaceful, moderate, committed to peace, etc. - he told me that, at least if it was between Fatah and Hamas, he would vote for Hamas. When, clearly stunned and angered by his answer, I asked why, he tried to explain that Mahmoud Abbas (current head of Fatah) was a puppet/traitor/etc. Hamas, he claimed, was, at least, strong and you knew where they stood. But, I asked incredulously, how can you support Hamas and say you want peace, when Hamas is openly committed to the destruction of Israel, and cites almost verbatim from the Protocols of the Elders of Zion in its very founding charter? Nadi dismissed these "allegations" about Hamas....insisted that they do want peace, and are only misunderstood and have their words distorted by the press.

Interestingly, Nadi, earlier in our conversations, seemed passionately opposed to religious extremism of any kind, spoke of Camus, Spinoza, and Neitze, and, overall, showed himself to be erudite and largely secular...and, yet. Yet, he, like a plurality of Palestinians in Gaza had done in 2006, showed himself to be, at the very least, remarkably naive, and shockingly vulnerable to Hamas' intoxicating rhetoric of "resistance".

In fact, its the fear of a Hamas controlled government in the West Bank that makes Israelis skeptical of ceding more land to the Palestinians, and the words of Nadi and Razy - as moderate as they are - only confirm my deepest fears....that Palestinian political culture hasn't even come close to ridding themselves of the most extreme elements in their society...the bare minimum which needs to transpire for a true peace agreement ever to be achieved.

My conversation with Nadi and Razy was challenging, stimulating, and, given our dramatically different backgrounds, pretty remarkable. And, while I acknowledge feeling genuine affection for them - and, indeed, wouldn't rule out conversing with them again - I'm also truly haunted by their support for Hamas, and wonder how many more moderate voices out there would, away from the TV cameras, and in the privacy of the ballot box in a future Palestinian state, for whatever reasons, cast their ballot for a party so openly hateful of Israelis and Jews.

While I would love for this story to end in a more uplifting and hopeful tone, I simply can't ignore the danger I see in front of me. When it comes to such irreconcilable values, there is definitely a limit to what even the most well-intentioned dialogue can achieve.
Posted by Adam Levick at 12:34 AM