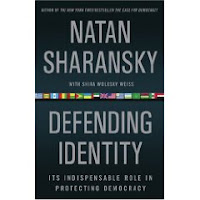 I've spoken in these pages about my identification as a secular Israeli and, while most likely fully understand that one can have a strong Jewish identity without necessarily being religiously observant, what may be less intuitive is the more general connection between such an identity - whether it be ethnic, religious, cultural, etc. - and the willingness to make sacrifices necessarily to defend values such as freedom and democracy, even in a secular state.

I was thinking about this while reading Natan Sharansky's newest book, Defending Identity. Sharansky, whose previous book was, Defending Democracy, argues persuasively that the democratic values we all cherish can more vigorously be defended by citizens who possess strong individual identities, in addition to their more abstract identification with democratic values, as such.

On page 3, he says, "Those who feel a connection to ideals and values beyond the individual self, who believe that they are participating in a grand collective adventure, and who are convinced that they are acting on behalf of past and future generations are prepared to make great individual sacrifices. This sense of purpose and meaning is what attracts so many to fundamentalism, not only in countries governed by fundamentalist groups but even among native-born Europeans. Without a similar strength of purpose and identity, the free world will not long be able to repel the assault against it."

For Sharansky, who was both a human rights activist and Jewish Refusenik in the former Soviet Union, it was his connection to Judaism - its values, history, struggles, and aspirations - which provided him with the strength, courage, and perspective necessary to fight for human rights in a totalitarian state. For him, as for many courageous people throughout history, there was nothing more liberating than fighting for a cause greater than merely his own self-interest, a cause that (paraphrasing a recent U.S. Presidential candidate) encompassed him, but wasn't defined by his existence alone.

Sharansky's new identification with his Jewish heritage - in a state where religious belief of any kind was considered subversive and where most of the nation's Jews were forced to leave such faith behind to be considered loyal Soviet citizens - helped him to endure 9 years in a Soviet prison, as he saw his struggle against state tyranny in the context of the Jewish struggle for liberation from tyrants throughout history. Moreover, it was the universal values of Judaism that gave him the intellectual and moral strength to resist his interrogators and their cynical rhetorical tricks - that is, their frequent attempts to convince him of the truth of two inherently contradictory thoughts...what Sharansky refers to often in his book as (Orwellian) double-think.

While I'm not saying that secular people without a strong particular identity can't resist tyranny and, indeed, this is part of a much larger discussion that could be had about secularism and democratic states, it is hard not to be moved when Sharansky, describing his Judaism in the context of his struggle to resist Soviety tyranny, says:

"The fire of freedom that burned inside me was fueled by a passionate connection to my people, our common history and our shared destiny. When I crossed the line from doublethink to dissent, I suddenly discovered a new world. I was no longer an isolated Soviet citizen but part of a vibrant community with a long history of struggle and liberation - a history that had left great empires in its wake."