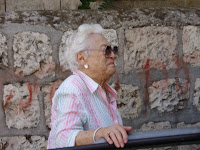 I went on a group (Nefesh B'Nefesh) trip today to the Herzl Museum, followed by lunch at the Ticho House, and a tour of the Me'ah She'arim neighborhood.

Theodor Herzl - one of the ideological founding fathers of modern Zionism - is for me, as with many Israelis and Zionists, one of my heroes. Though he didn't live to see it, and though there were clearly other influential Zionists who deserve credit for the creation of the state of Israel (David Ben-Gurion, Moses Hess, Leo Pinsker, and many others.) his vision of a modern Jewish state eventually became a reality, despite the enormous practical obstacles to achieving such a project, through persistence, his practical skills as a diplomat and a writer, and his ability to inspire others to believe that a dream can indeed become a reality.

I was thinking about Herzl's vision and grit during our tour of the museum, as well as during lunch, where I had the amazing fortune of meeting an elderly woman who accompanied us on our trip named Francis Greenberg. When she, at age 88, walked off an El Al plane and into the terminal and became a citizen of Israel, last July, it was her second time trying to make Aliyah - the first being 61 years ago.

Francis, from Poland, whose parents, two sisters, and brother, were killed by the Nazis, was one of the passengers on the ship, Exodus, in 1947 which carried Jewish emigrants with the intent of taking its passengers to Palestine, then still controlled by the British. Though most of the emigrants, like Francis and her husband, were Holocaust survivor refugees, the British, who had set quotas severely limiting the number of Jews who could enter Palestine, seized the ship, and deported all its passengers back to Europe.

in March 1949, Greenberg and her husband, Isak, who were married in a displaced persons camp in Germany a year earlier, moved to Pittsburgh (Squirrel Hill), where Mr. Greenberg's sister lived.

The Greenbergs had been married for 60 years when Isak passed away, in 2008. Shortly thereafter, Francis decided it was time to try Aliyah again, so she left her home and flew to Israel on a flight arranged by Nefesh B'Nefesh. According to a story in Ha'aretz, loudspeakers at the airport blared Israeli folk songs, and children waved Israeli flags when she, and 200 other N. Americans who made Aliyah that day, arrived.

Herzl in his book, "Old, New Land" said, "If you will it, it is no dream", which became a popular slogan within the Zionist movement. I don't think Francis would disagree.
Posted by Adam Levick at 11:42 PM