My visit to Dheisheh Refugee Camp 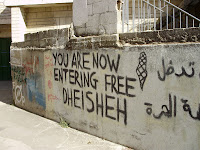 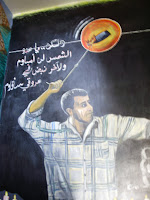 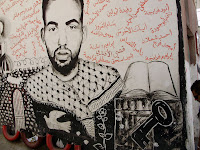 My tour of the Dheisheh Refugee Camp, just outside Bethlehem, was prompted by a friend, in Israel leading a birthright tour, who is sympathetic to the Palestinian cause and has friends/contacts in the territories. Though she knew that my politics are much different than hers, we are truly friends, have genuine respect for each other, and she knew that I'm quite inquisitive by nature and, as an ardent defender of Israel, might possess a desire to know as much as possible about what I'm talking about when discussing/debating the Israeli-Palestinian Conflict. And, as such, first-hand knowledge of a "refugee camp" immediately struck me as something quite valuable.

She has a friend who runs a UN funded recreation center called al-Feneiq, known simply as The Phoenix, which is where, after a bus and cab ride that lasted a little over a half hour coming from the center of Jerusalem, our day began. The community center itself is a nice facility, and contains a kitchen, guest house, gym, library, cultural performance venue, and play room for children.

The tour of the town itself was led by another resident of Dheisheh, who walked us around the area, stopping to point out particular sites of interest, and a bit of history. Though I expressed to my friend prior to our tour that I didn't want this to be a propaganda tour - that I just wanted to see the area with my own eyes and make whatever determinations I would make - and our guide mostly refrained from gratuitous remarks about Israel culpability, and he was quite friendly and a good listener, he would, nonetheless, occasionally relate stories of the IDF destroying specific buildings in the area that were being used by terrorists, clearly indicating that he didn't believe the justification given by the Israelis.

Periodically, our guide would, with a non-judgmental tone, confirm that some of the graffiti we'd see in the neighborhood was the image of deceased terrorists, serving as an urban memorial or sorts. One such image "commemorated" the life of a "martyr" belonging to the Popular Front for the Liberation of Palestine (PFLP), a Marxist-Leninist, secular, nationalist Palestinian political and paramilitary organization, founded in 1967, who rejects the right of Israel to exist, and who has been responsible for terrorist attacks which have killed dozens of Israeli citizens. Other graffiti/art we came across included similar images of "resistance" and of course, several images of Che Guevara.

What we came across in Dheishe's densely populated winding, hilly streets doesn't in any way resemble a camp as such. It actually resembled a some of the bad inner city neighborhoods in Philly, New York, and other large cities in the U.S. Many of the homes were extremely run down, and the area was full of what we would call urban blight - structures, for whatever reason, in complete disrepair or partially or fully demolished. Amongst this poverty, there were also homes that were extremely modest but intact, eateries (one of which we stopped in and had, we all agreed, an incredible meal), other miscellaneous shops, at least two high-speed Internet and computer centers, a medical center, and another smaller community/sports center. (The art in the center included both peaceful messages, as well as at least two large murals of young Palestinians throwing a bomb...presumably at Israeli troops)

Indeed, it was at this center where we ended our tour, where the three of us on the tour drank coffee with our guide, and a couple of his friends, at the center's cafe. After about a half hour or so, I noticed, out of the corner of my eye, our guide and his friends staring strangely at me, with an inquisitive look on their faces. He asked what I was wearing around my neck. I replied that it was my Star of David which, to be honest, I had worn like I do every day, but had also taken some effort to keep under my shirt...I guess unsure about what the reaction would be. Though their reaction to my Jewish symbol was reserved, I was and am still a bit skeptical that they truly didn't know what it was. I mean, really, the Israeli flag contains the same symbol and they've surely seen that before. I don't know that I felt unsafe necessarily at that point, but I did perceive (correctly or incorrectly) that, in eyes and for most Palestinians, the Israelis, who he sees as his people's oppressors, are synonymous with the Jewish people as a whole....what I described in a recent essay as "Israel as the proverbial Jew, writ large".

I mean, I'm sure, at least prior to discovering that I was Jewish, he saw me, like my other two friends on the tour (who were also Jewish but more pro-Palestinian than me), as "activists" sympathetic to the Palestinian cause, and I certainly didn't go out of my way to dissuade him of this assumption on the tour. I would listen to what he said, regardless of how critical he was of Israel, with, if anything, a neutral, inquisitive look, deciding early in the day that I wouldn't, in my conversation and overall affect, lie, and pretend to be share his hostility to Israel, but also wouldn't be argumentative or confrontational - which, in other circumstances, would be my natural reaction to what I perceive as anti-Israeli propaganda.

I was there, ultimately, on something of a fact-finding tour, and I'm glad I went. The whole Palestinian "refugee" camp story, as a political narrative, is so deeply flawed - a story I discussed briefly in my last post - and, without a broader understanding of what the existence of such communities actually represent, I could easily see a neutral observer easily assuming Israeli culpability in every demolished building, every story of woe and suffering that we encountered along the way. Its this facile causation between every conceivable case of Palestinian suffering and Israeli actions that feeds into the demonization of Israel, a wholly false narrative that is quite dangerous to the Jewish state's survival...and something I spend much of my life attempting to refute.

I guess I also was motivated by the desire to really know at least some actual Palestinians, so that my Zionist politics don't merely deal with their population as some abstraction, completely divorced from their reality. Indeed, much of my argument against anti-Israel activists is that, whatever their politics, they simply see Israelis as the proverbial "other", reduced to a cartoon caricature of evil, rather than attempting, at the very least, to see the complexity and nuance, good traits and bad, which Israelis possess, and that exists in every group. Likewise, my Zionist activism can only be strengthened by possessing a more intimate knowledge of the kindness, generosity, complexity and pathos of the Palestinian people.
UPDATE on April 9, 2010:
Regarding that UN funded central community center called al-Feneiq, known simply as The Phoenix, where me and my friends taking the tour of the Dheisheh "Refugee Camp" met our hosts, I recently came across something of interest about the center. The director of the center was an endorser of a document published in the journal, Washington Report on Middle East Affairs, calling for a boycott of ''Israel at 60'' celebrations. The document refers to Israel as the "Colonial Settler Project", accuses it of practicing "Apartheid" and of orchestrating a "slow genocide against a million and a half Palestinians". It concludes by charging that ''celebrating “Israel at 60” is tantamount to dancing on Palestinian graves."
The document was signed by the usual cast of radical Israeli and Palestinian NGOs who have been active in the demonization and deligitimation of Israel for years. Their endorsement of such a vile document lends credence to my original observation about the Dheisheh community - one that, with all their talk about simply wanting justice, is compromised by leadership which possesses a hatred of Israel that transcends the particulars of the debate over territory and statehood.
Posted by Adam Levick at 6:22 PM