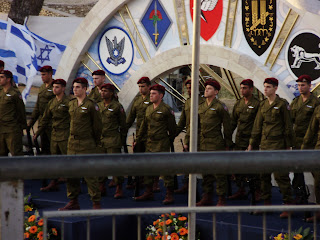 The sound of religious school kids marching down the street this afternoon at Ben Yehuda, singing songs, and waving Israeli flags reminded me that today is Yom Yerushalayim Day in Israel - commemorating the reunification of Jerusalem and the establishment of Israeli control over the Old City in June 1967 after Israel successfully defended itself in the Six Day War. I was able to attend the Nation's official ceremony today at Ammunition Hill.

Ammunition Hill is the main official memorial symbolizing the liberation and reunification of Jerusalem. The fortification is preserved as it was in the war and there is an underground museum that commemorates the soldiers who fell in the battle as well as an exhibit displaying the stages of the battle of the three brigades, the Air Force and the Central Command who liberated Jerusalem.

183 soldiers fell in those six days of fighting and the museum of Ammunition Hill is dedicated to their memory. It was here that many lost their lives and it was the capture of this hill that made it possible for the Israeli soldiers to forge ahead into the Old City and eventually allow the paratroopers to reconquer the Old City of Jerusalem.

Among the official attendees were President Shimon Perez and Prime Minster Bibi Netanyahu, who both laid a wreath at the tomb of the unknown soldier. Though the speeches at the ceremony were all in Hebrew, there were some stirring moments, such as a spirited rendention of Hatikvah which, I guess due to the overall solmenity of the event, my new citizenship, the Israeli flags lining the park, and the thought of so many soldiers who gave the ulitimate sacrifice so that Israel may live, took on a more emotional resonance. (After the ceremony, as he exited, Bibi got within maybe 6 feet of me but, alas, my camera battery decided to die at that moment!)