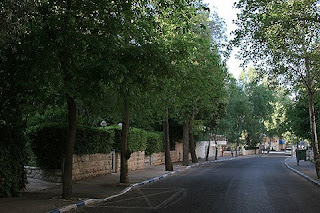 The contrast between my living conditions and that of the the early Olim (immigrants) to Israel (not to mention the early Zionist pioneers in pre-state Israel) is striking - reflecting, to a large degree, the increase in standard of living for all Israelis over the 61 years she has been a state. (For instance, per capita income, which was $3,500 in 1950, has risen to over $28,000 today, placing Israel's economy 22nd, out of 192 nations, in the world. That this economic success has occurred with little in the way of natural resources makes it even more remarkable. I'll resist the temptation to bore you with more facts and figures).

My furnished, spacious one-bedroom apartment (spacious by my standards, anyway) in the Rehavia neighborhood, has central air, high speed internet, and access to a backyard garden . Rehavia is an upscale Jerusalem neighborhood bordered by Nahlaot to the north, Talbiya and Katamon to the south, Shaarei Chesed to the west, and the Old City to the east. I'm a few minutes walk from shopping, cafes, and all the other cosmopolitan amenities offered by this ancient and modern city.

Rehavia was established in the late 1920s on real estate previously owned by the Greek Orthodox Church purchased by the Israel Land Development Company in 1922.

Landmark buildings in Rehavia include the headquarters of the Jewish Agency for Israel, the Prime Minister's Residence, the Jerusalem YMCA, the King David Hotel, and the U.S. Consulate-General on Agron Street. In the center of historic Rehavia is Yad Ben-Zvi, a research institute established by President Yitzhak Ben-Zvi.
Posted by Adam Levick at 11:12 PM

Sounds like you're in a very nice neighborhood. It must be nice to be somewhere new after being in Center City so long.

Photo taken looking down your street in the direction of Ussishkin if I'm not mistaken - is B'Sograyim still open on the corner there - great food and surrounds.

I'll have to check the name of the place I'm thinking about, but I think B'Sograyim is still open.