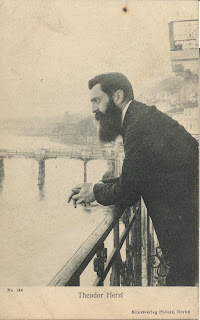 Several people I've spoken to about my decision to make Aliyah expressed great surprise when I related to them that I only visited Israel twice (both for little more than a week) before making my decision, and that I speak almost no Hebrew - accustomed as they are to other Olim having the experience of living here for extended periods w/ ample time to learn at least a little Hebrew prior to their Aliyah. Indeed, during a conversation I had with a young woman who had just completed Birthright, at my first Shabbat dinner here, I was asked what convinced me to move here, to which I replied that I didn't need too much convincing, as my decision was not based on a religious imperative, or any sense that Israel is the proverbial "land of milk and honey", or that, as a Jews, Israel is the only place to truly feel personally fulfilled - reasons that are often given by Olim, and which certainly are valid.

Rather, my decision was a political one - one (as I stated in my essay in the Exponent) predicated on a belief in the inherent righteousness of the Zionist cause, a genuine fear of the existential threats that Israel continues to face, a determination to contribute to her defense, and, more broadly, an increasing sense of the weight of Jewish history on my shoulders...that the Jewish longing to, as Israel's National Anthem "Hatikvah" dreams, "to be a free people" has not yet been fulfilled.

Indeed, I was thinking about this when I visited the Stern House the other day, where Theodor Herzl slept when he visited Jerusalem in 1898 - a year after he published Der Judenstat, his manifesto urging Jews to move to their ancient homeland. Herzl's Zionist inspiration was practical - a reaction (as a well-educated, secular, and assimilated Jew) to the shock of witnessing the anti-Semitism of the Dreyfuss Affair in France, and the overall failure of Jewish political emancipation in Europe that this episode portended - and, indeed, was motivated by the belief that only by having a state of their own could Jews truly be safe.

So, not only did Herzl come to the conclusion that a Jewish state in historic Palestine was necessary prior to visiting the land (and, indeed, his visit was merely a practical one, arranged to meet with the Sultan of of the Ottoman Turkish Empire to seek his support), but the overwhelming majority of the hundreds of thousands of Jews who heeded his call, and moved to pre-state Israel in the subsequent decades during the major waves of Aliyah, hadn't once set foot on the soil prior to their decision. Though they lacked practical experience living in the land, they did possess, in large measure, a sense of the importance of Zionism in the context of Jewish history, Jewish safety, and Jewish dignity.

My Aliyah was never a "lifestyle" decision.
Posted by Adam Levick at 9:24 PM