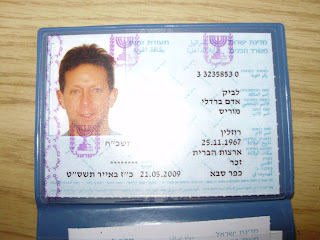 Though I became a citizen of Israel within an hour and a half of arriving here, where I received a booklet, given to every individual immigrant (I can't believe I'm referring to myself as an "immigrant"!), known as a Teudat Oleh, today I received my offical Israeli ID (Teudat Zehut). The Teudat Zehut is a cross between a social security card (in that it lists my unique identification number) and driver's license (in that it has my photo, date of birth, address, and other such info), as well as confirmation of my Israeli citizenship.
Posted by Adam Levick at 7:56 PM