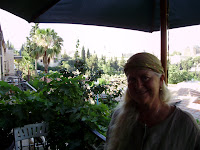 I was walking around in the artists' colony of Yemin Moshe today when I came across a home with a sign posted inviting all to enter an artist's open house.

(Yemin Moshe was established in 1891 by Moses Montefiore outside Jerusalem's Old City and is easily identifiable by the large windmill at the top of the hill overlooking the Hinnom Valley on King David Street. The nearby neighborhood of Mishkenot Sha'ananim, established in 1860, has an international reputation as a literary/artistic retreat and workshop. Writers such as Saul Bellow, Phillip Roth, David Grossman, and John Le Carre and many others have written all or some of their works at Mishkenot.)

I hesitated for quite a while - not accustomed to entering strangers' homes - but finally walked in after I saw the Artist saying goodbye to a young couple who seemed to have had a very enjoyable visit. And then I met Bridgitta Yavari-Ilan: artist, writer, and intellectual...a Protestant, and strong Zionist who was born and raised in Sweden, and who spent her first years in Israel caring for Palestinian orphans. She shared with me a brief version of her life story, showed me to her balcony where she enjoys an incredible view of the Old City, introduced me to her husband Elliot (a S. African born Jewish Psychologist), asked me about my Aliyah, my dreams. Yes, of course she said, I could take her picture. Yes, I said, I'll buy her latest book about art, love, poetry, and especially (as a convert to Judaism whose notions of the divine often fall outside of the faith) G-d. The book costs 195 shekels (about $47 U.S.)...."but, for you, since you just made Aliyah, I give you special price....100 Shekels."

We parted, and she insisted that I return, that I was welcome to stop by whenever, and I had the sense she actually meant it.

"Whenever" was sooner than either of us imagined. For, as I was walking around the hustle and bustle in the Arab and Christian sections of the Old City late that same afternoon, who would I see but Brigitta and Elliot. We all agreed that the odds were pretty remarkable (the pop. of Jerusalem is 760,000), and Brigitta, an artist and spiritualist through and through, believed it was fate. And I, well, not much of a believer in fate, but, it was certainly serendipitous.

We spent another half hour or so casually conversing while walking out of the Old City, out of the Jaffa Gate entrance, and into the new upscale shopping center built just outside the Old City, until we were finally about to depart. But, who was that walking right towards us seconds before we were to say goodbye? The same young couple who I met hours earlier at Brigitta's home! Strange city this is.