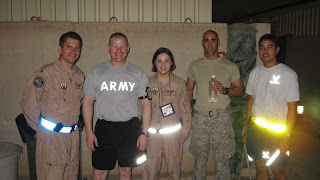 (This is the fourth dispatch from my good friend Andy, an American serving in Iraq as a doctor in the U.S. Air Force Reserves.)
As I inch to the half way point of my tour, the staff at the military hospital has undergone a near 100% transition over the past 96 hours. Included in that process was the need to say goodbye to the people who I've been working with so closely for the past 6 weeks.


Its interesting how quickly you develop a bond with people when you work in such an intimate, and yet inherently inhospitable, environment. Although this hospital has been staffed by thousands of people since the war began in 2003 nobody can imagine a group as close, hard working and fun as their own!


Because I came in the middle of their rotation I was lucky to be a fresh face in a group that was already a well-oiled machine. Because of their competence and unity, I only had to focus on being a good physician, and my transition was realtively easy. They also were able to advise me about ways to neutralize problems that periodically crop up - such as rolling power outages in 120 degree heat, dust storms, the location of all saftey bunkers on any given route, and (most importantly) the sadness of being so, so far from the ones you love - a distance that Skype simply cannot diminish.


I greatly enjoyed working will never forget this cast of characters who introduced me to Iraq:


Wally is an Air Force PJ (Para Jumper rescue team) and my work out partner. His regiman increased my pull up capabilities from 0 to 6 by the time he departed. Wally recently received a "Dear John" letter during my time here. His wife sent him a message via Skype telling him that she, and their daughter, was leaving him. Its a profound understatement to note that he was dreading the thought of going home to an empty house.


Tod is a Psychiatric Nurse and one of the most compassionate patient advocates I had ever met. He truly challenged the sytem by publishing reports of the Army's rising mental health issue and suicide rates and some solutions he developed to stem the tide. His enthusiasm for his job was infectous.


Chaplain B., who was a Christian minister that went out of his way to be inclusive to all religions. He almost functioned as a match maker for Jewish soldiers, and kept our friday night Shabbat services on track.


Captian D. - She was the lone person from my unit who was from my home town of Pittsburgh that was deployed in Iraq at this time. Her husband is currently serving in Afghanistan and they will be away seperated for over 14 months. She was going home with mixed emotions, as she was leaving a war zone while her husband would be in danger for another 8 months.


Simon - an experienced veteran of 4 deployments who was our "bulldog" - named for the person who organized our sqadron for recieving and delivering patients at the flight line. He was so calm and organized that I believed mobilizing 40 patients (10 on stretchers), 1 doc, 6 med techs, 3 volunteers and 4 drivers onto 2 buses and 2 ambulances at "0 dark hundered" (miitary terminology for the wee hours of the AM) to drive in concert to a heavily secured flightline and load patients onto an airplane in 120 degree heat was actually EASY. I would be cured of that delusion the next day when we tried the same mission with a brand new team! 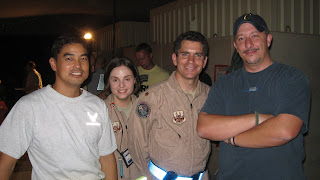