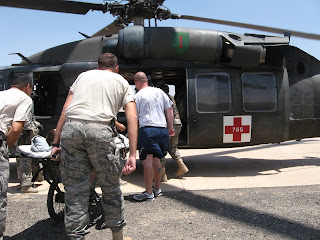 Hello from F.O.B (Forward Operating Base Warrior) at a location in Iraq.
I arrived here 17 July at 0500 after a flight that left Balad at 0400. I was welcomed by Major G. - a Nurse Anesthesiologist - gave me a quick briefing about the base. The base is quite small and is predominantly US Army. They actually have no dedicated airplanes..only helicopters from the 1st Air Calvary Division.
The base is nestled into the southern part of a city which is a fairly large city that is a mix of Kurds, Turks and Arabs..somewhat volatile with ethnic tensions high because of a electoral standoff here - I dont know if you guys are follwing Iraqi politics..but it is incredible they actually have (democratic) "politics" here, after [so many] years of dictatorship in the region.
Like most of Iraq - despite the tensions - violence levels are still way down. Although scattered incidents (both against ordinary Iraqi citizens and us/iraqi troops) still occur.
I found thast my mian goal here is to fly Medivac missions. Aerovac is an airplanes..Medivacs are (Army) helicopters.
The reason to fly in a Medivac (as opposed to a Aerovac) is that its quicker. If sombody in the vicinity of this F.O.B is critically ill a C-130 would have to arrive from another location and would take a minimum of 3 hours to fly here and pick the patient up for transport to a Hospital. A helicoipter which is based here takes about 40 minutes to get the patient to the location.
The Medical Corps here is pretty thin..we have a emergecny medicine doc, internal medicine, general surgery and myself. They have an OR and basic labs and imaging. If a patient is sick they need basic stabilization here and then trasnport to Balad.
Having no rotary wing (helicopter) experience my first job was to go to the 1st Calvary and get a short lession from the Medivac team. (picture 3). I met the pilots, crew chief (folks in charge of aircraft maintenance and the back of the aircraft during flight) as well as the medics. They taught me where to sit, how to manuver, my job in the aircraft (aside from medical care it is watching out the back of the aircraft for other aircraft, wires, "Safire" (surface to air fire), etc. I also saw the wall featuring all the aircrew who had been killed in action in Iraq. Unlike the fixed wings aircraft, rotary aircraft had been shot down (fortunately, though, not in the past 2 years!)
I was hoping to have time to digest my new job but on 18 July (new city, day #2) my first mission began when a army solidier with a testicular torsion came to the ER. That is a potential emergency when you get decreased blood flow to the testicle. It is very painful. I put the drugs I would need on my vest (Morphine, Slaine, nausea drugs ) and a heart and oxygen monitor and oxygen with the patient and the patient was taken out to the waiting chopper
(I snapped a picture of myself and the flight medic while the patient was being loaded.)

The helicopter ride was pretty intense as unlike an airplane you feel every move the helicopter makes and cannot communicate due to the noise. I did have a wire that allowed me to hear and speak with the aircrew but not the patient. I basically communicated via thumbs up and thumbs down signs. The patients oxygen levels started to drop (due to shallow ventilations from the morphine and the fact that the cabin is not pressurized and oxygen levels are lower high in the sky). But this was correctred with more oxygen.

Because we are a medivac aircraft and cannot carry weapons we had an excort helicopter gunship the entire flight. It was reassuring to see them on the left. (pic #5). The pilots were in constant conversation about recent atacks and discussed what areas to avoid (populated centers, hill tops).

When we landed at our destination to refuel and drop off the patient I met the person manning the large caliber weapon on the helicopter gunship. It was a 22 year old woman! (1st picture below the text). I am always amazed in the military how so much responsibility is sucsessfully handled by such young people. Both of our pilots were mid 20's and the medic as 23 while the crew chief was 27. Over the hum of the rotars I had a brief conversation with this 22 year old woman who was defending my helicopter round-trip. She was from a small town in New York and wanted to eventually be a nurse. When I asked her why she did not want to be a doctor she said "I want to care for people, sir"..and with that bid me farewell and went back to protect us with her machine gun!

We dropped off the patient to the folks in the ER and then flew back. 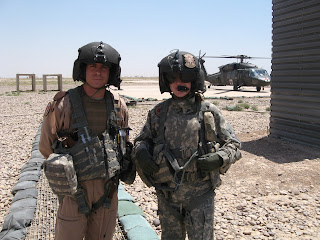 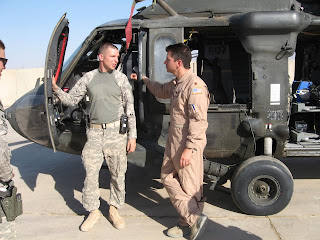 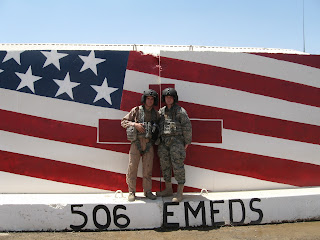 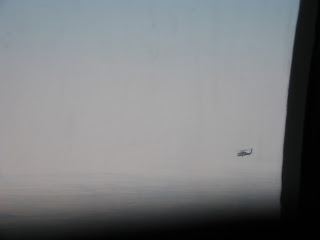 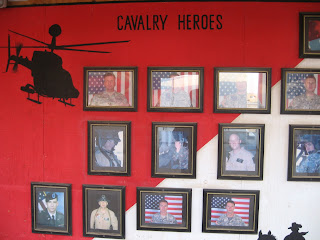