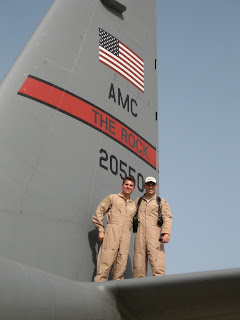 (This is the 6th installment of my friend Andy's dispatches from Iraq, where he serves as a doctor in the Air Force Reserves)
I flew my first flying mission today and it was uneventful from a medical perspective but quite an experience otherwise. It gave me the opportunity to see a broad swath of Iraq from the air. We started out in the pre- flight briefing (where I was told where my new home will be in about 48 hours!) and then went to a small base on the iranian border than back to Balad and off to Mosul and back to Balad. All these bases are in the north of the country.
My role was to provide medcial support for certian high level passengers (ususaly generals) who I actually never got to meet because the back of the plane was so crowded. The pre-flight report was actually reassuring as there were no reports that SAMs (surface to air missles)  were being used against C-130's.
I also met the flight crew and was suprised to find out that the co-pilot was a pittsburgher from Bethel Park who went to the air force academy. We talked about Pittsburgh sports and food for a long time and it tuned out a high school teacher of his was one of my patients when I was a resident!
We took on about 50 army soldiers armed to the teeth with and loaded"pallets" (which means gear) (pic #2), and took off for the North. The Iraqi countryside was EXTREMELY dry and barren. We landed at our first destintion and droped off some packages. For some reason after flying over this baren, inhospitable countryside for miles (picture #3) it was great to land at a distant base and see the American flag flapping in the breeze (picture 4) at the Air Base.
We than flew to the small base on the iranian border and dropped off 50 soldiers stating their tour and picked up 50 mor who were going home. The soldiers told me they had been in iraq for about 14 month and essentially stood guard at the base and watched the iranians across the border...who peered straight back at them.
We then drove some more and dropped off the soldiers and re-loaded AGAIN to drive to our next destination. When we were close, a sandstorm hit and the pilots had to land with vitually no visibility.  It was incredible as the pilots used radar and instruments and instructions from the control tower to land..it took 3 aproaches as they over shot the runway the first two times. It was strange to look down (pictures 5 & 6) at both cities, as they appeared peaceful from the air - but down below there were terrorists present who were often setting car bombs and IED's and killing many inocent people. It was hard to imagine there was a low level war going on below me. We then flew back to our base (picture 1 and 7).
Me and my Pittsburgh compatriot than went up the escape hatch and got a picture on top of the plane by the tail wing. This plane was so huge!
It was really a unique experience to be in the front of the airplane with the pilot and aircrew as the discussed flying the plane and how to handle the problems presented by the environment.
Goodbye for now,
Andy 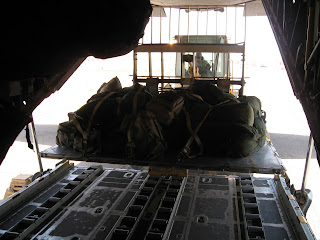 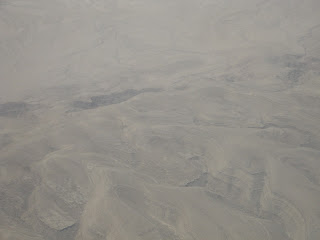 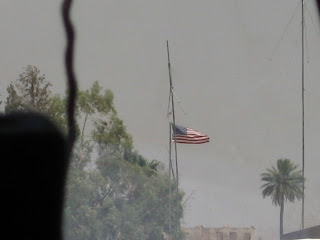 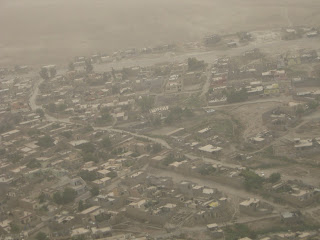 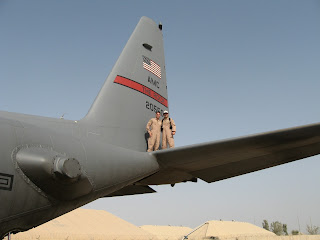 Hi Andy,
I saw Adam's link to your blog. I remember hanging out in the Student Activity Center when Adam, you and I were at Temple. My family and I are truly grateful to you and those you serve with!
Carra Braveman Minkoff