(This is the second dispatch from my good friend Andy, an American serving in Iraq as a doctor in the U.S. Air Force Reserves)
I was speaking with Jeff (my brother) yesterday on Skype and he was asking me a lot of questions that I have been asking myself. Specifically about the "Rules of engagement" that are quite controversial and some say hampering the U.S. efforts in Afghanistan.

One interesting aspect of my time here is that I can function as somewhat of an "embedded reporter"...being able to ask every silly question of our troops that you can imagine. Because I am their Doc and also wear the same uniform there is a level of trust and they are always happy to tell me how they feel about any given subject.
The have been speaking a lot recently about changes in the "rules of engagement" (ROE) here and in Afghanistan, and how that has effected both the safety of our troops and the war in general. "Rules of Engagement" are an official policy that dictates how US troops can respond to perceived threats. Initially the troops here had very loose ROE.
As the security situation here showed improvement the US and Iraqi government negotiated a new agreement starting in 2008. This agreement was to reflect the improved security in Iraq and greater reliance on the Iraqi forces.
The new agreement was markedly different and tightened the ROE quite a bit. Without getting into the specifics of the particular changes in the new rules of engagement - its safe to say that, the higher you get in the chain of command the greater the belief that the new rules give more responsibility to the Iraqi military and make the war less of an American led effort. They also point to the fact that despite these new rules casualties (US and Iraqi) continue to to drop. Currently in Afghanistan (with which I have less immediate contact) the situation is difficult.
The prior General (Mcrystal) believed that a large part of our problems there lay in large numbers of civilian casualties alienating the local population. Therefore he instituted restrictive rules of engagement especially when it came to air support. The belief was that less civillain casualties would lead to more support for the US/Afghan government. The troops there (that have come to Iraq) seem to believe restrictive rules of engagement at this point (when the war is still very "hot") make it more difficult for the US troops to defend both themselves and the local population.
There are reports that the new commander (Petreaus) is reviewing the ROE and may make changes. It is quite complicated. I will write more in the next couple days ! I have enclosed my IRAQ clock which shows me inching past the 40% done mark!!! - Andy 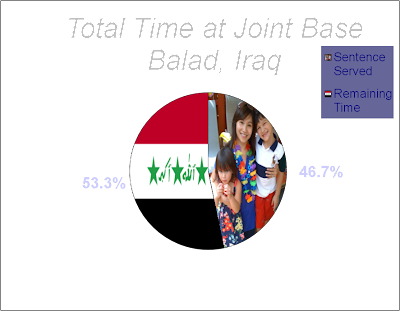