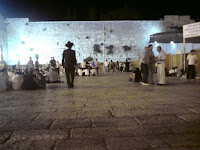 Last week, Israel and Jews around the world observed Tisha B'Av, a day of mourning to commemorate the many tragedies that have befallen the Jewish people, many of which coincidentally have occurred on the same date in the Hebrew calendar. Tisha B'Av primarily commemorates the destruction of the first and second Temples, both of which were destroyed on the ninth of Av (the first by the Babylonians in 586 B.C.E.; the second by the Romans in 70 C.E.), but on this day we reflect on the many other tragedies of the Jewish people, many of which occurred on this day, from the expulsion of the Jews from Spain in 1492 to the mass deportation of Jews from the Warsaw Ghetto.

Like many in Jerusalem, I spent some time on that evening at the Kotel (Western Wall) reflecting on these tragedies but also found myself thinking of these catastrophies in the context of the Jewish community's often ambivalent relationship with power and my new citizenship in the modern Jewish state, a nation who has been forced to exercise power in order to prevent additional tragedies from befalling the Jewish community in Israel and the diaspora.

Indeed, Israel's creation, and their role as the guardian of the Jews, can be seen as a direct response to the tragedies that have befallen us, an attempt to turn history around, to act instead of always being acted upon. Whether Israel was defending itself in war, or aiding/rescuing endangered Jewish communities around the world, the Jewish collective has had at its disposal, for the first time in over 2000 years, a state apparatus with the means - logistically, politically, diplomatically, and militarily - to protect its interests, just as other people organized in nation-states have had through the ages.

However, with this organized exercise of power comes a price, a burden that many Jews seem unwilling or unable to bear - as any exertion of power, any control over your own fate, inevitably carries with it a burden, the loss of an innocence of sorts, the innocence that is often projected upon people perceived to be powerless.

Israeli military power (exercised against terrorism and small scale regional threats, and in actual wars against state actors, and its territorial repercussions), and the relative success of Jewish communities in the West (and the subsequent political power that such success invariably brings), seems to instill in many Jews an uneasiness that sometimes translates into a loss of identification with their fellow Jews and a need to identify in a way uniquely separate from such power, or even in outright opposition. Many Jews today find it more comforting, and certainly easier to stomach, identifying with non-Jewish "progressive causes than with having to continually defend a state in all the complexities and compromises associated with even the most progressive national enterprises.

This recurring tendency of Jews, both as individuals and as communities, to pay greater attention to their own moral performance than to the necessities of survival is a tendency that writer Ruth Wisse characterizes - in her book aptly named "Jews and Power" - as “moral solipsism.” Wisse further argues that in displaying the resilience necessary to survive in exile, and not burdened by the weight of a military, many Jews believed they could pursue their mission as a “light unto the nations” on a purely moral plane. Wisse demonstrates how their political weakness increased Jewish vulnerability to scapegoating and violence, as it unwittingly goaded power-seeking nations to cast them as perpetual targets.

Indeed some such Jews I have known express their disapproval for the acts of Israel or the Jewish community at large by lamenting this newly acquired capacity to exert power and exclaiming that (with a tone that almost approaches longing) "Jews have always been the underdog...the victim...the weak...never the powerful", confirming for me at least that some Jews almost seem to fetishize weakness and, in so doing, fail to see the role that such weakness has played in the suffering that has befallen Jews through the ages.

Yes, with national sovereignty there is a price that has to be paid in terms of the occasional infliction of human suffering (even if unintentional) that invariably occurs as the result of even the most responsible and restrained use of national power. But in the lives of individual adults, as in the lives of responsible nations, rarely is there the luxury of making choices that will lead to perfect justice for all concerned. Rather, with every serious decision in front of her, Israel - the guardian of the Jews - must carefully weigh the costs and benefits of various possible acts, and try to make the decision that will most likely result in the most positive outcomes not only in the present, but taking into account the safety and well-being of future generations of Jews as well - a profound responsibility that can not be taken lightly, and a responsibility we all should take seriously as a community as we lament the suffering of so many throughout our history on Tisha B'Av.

That's one of your best efforts I think.