On writing in Israel 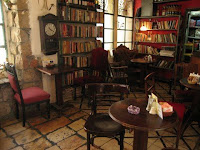 The Tmol-Shilshom bookstore-cafe restaurant (picture on the left) just off of ben Yehuda, opened in 1994, and was named after Nobel laureate S.Y. Agnon’s novel. Their claim to fame is that they quickly became a well known establishment where Israel’s best known writers read from their works. The first one was Yehuda Amichai, who read from his poetry at the opening of Tmol-Shilshom in June 1994. Since then they`ve had Amos Oz, A.B. Yehoshua, David Grossman, and many others.
It is at this location where I recently attended a new Jerusalem writers group - where a dozen or so writers, and bloggers, will regularly meet to hopefully provide support, advice, community, and a bit of constructive criticism to one another.
Though I have always been quite political - and had contributed a couple essays to my college paper as an undergradudate - my writing only really began with a letter to the editor published in one of Philly's local "alternative'' weeklies in 2006. My increasing identification with what I would call center-right political thought, which ran in opposition to what I perceived as consistently predictable ''progressive'' tropes about issues such as race, poverty, terrorism and the Israeli-Palestinian conflict - inspired me to continue such letters. And, the frequency of my submissions and publications - to both the local alternative press, Philly's major daily paper, as well as, on occasion, papers outside the Philly region - began to increase, owed to my realization that I had a very minor talent for communiticating my ''alternative view'' in an informed yet pithy manner which seemed to suit the needs of the editors.
As my letters began to feel a bit less satisfying, and wishing to expand my thoughts beyond what I could express in the mere two or three paragraphs typically allotted for such entries, I took a crack at full-length essays, and had the good fortune of having a submission published in Philly's Jewish weekly, The Jewish Exponent, on the anti-Israel movement in Philadelphia. I then was asked to write another essay on my decision to make Aliyah, published a week or so before my deaparture to Israel.
My blog began quite modestly at first, meant merely to chronicle my experiences in my new country (an online travel journal of sorts) but has turned into something much more. Adam's Zionist Journey has become an opportunity to describe my life as such, but informed by what I see as the big picture, the historical and political context of my new citizenship in the modern Jewish polity - a state which faces the challenges that all such nations face, but which also must deal with multiple existential threats, threats to the Jewish body politic which often stem from the same ideological origins as those threats individual Jews have faced throughout history - what has been referred to as Israel as the Jew writ large.
And, though I'm quite comfortable expounding on such ideas, I am not, by any means, a gifted or prolific writer, and the words needed to give shape and form to my broad themes often struggle to burst free, a challenge especially apparent in my initial story-telling...the linear trajectory of the initital ''who'', ''what'', and ''when'' of the post.
So, in addition to welcoming comments on the political content of my posts, I encourage my new community of writers in Jerusalem, and all friends of this blog, to provide constructive feedback on the quality of the stories themselves. I have absolutely no illusions that I'll ever become a great writer, but would simply be content - through perseverance, application, industry, assiduity, will and desire - to become better than I am.

Adam,
I'm always amazed when I read your blog. It's difficult for me (being a senior citizen) to concentrate on any writing that doesn't include pictures, but when I read your blog, you keep me focused and interested, I'm able to concentrate and I understand what you are writing about. I've learned more about you and about Israel ever since you started writing. I know your mom is proud of you. I think you would have reached your Dad in a way that no one ever could and your work would have made him very proud of you even though you're not playing baseball (LOL).

Phyllis, thanks so much for your kind words. It means a lot to me.