(This is the 10th dispatch from my friend Andy, an American doctor serving in Iraq with the Air Force Reserves)


Hello!
A part of this war (actually a phenomenon throughout the A.O.R) is the tremendous work done by third country nationals.
This is a term used for people who work on the base ( for the us military) but are not from either Iraq or the allied countries. They are usually from developing countries and are hired by the contractors (Haliburton, KBR, multiple Turkish companies) to come here and do jobs that keep the base running. The do Laundry, cook the food, work at all the shops and restaurants, cut hair, pump gas, clean everything from the hospitals to bathrooms, maintain the rooms, provide internal base security ,work at the gyms, swimming pools and movie theaters, base exchange, drive the buses around base, etc.

They are mainly from countries that speak some English like India, Pakistan, Nepal, Sri Lanka, the Philippines or have specific skills like the soldiers from Sierra Leone, Honduras, Columbia and Uganda.
In many ways these folks lives are much tougher then ours. They live in (for us) cramped conditions, work (SOMETIMES) longer hours and have significantly less amenities. There salaries are a fraction of ours although the countries from which they come have a significantly lower cost of living. The also typically stay here for years in order to make money for their families.
While here they are subject to the same risks as the rest of as as missiles lobbed at our base do not discriminate between a Nepali and an American.
They deal with being here because they are making much more money then they could at home and spend almost no money here.
There is a slight tension between the military and the contractors as they hypothetically could be a security risk. The thought is somebody could either offer them a lot of money or threaten their family back home (or a combination) in order to induce them to participate in an attack on the base. There are very strict rules about individual friendships between our troops and third county nationals.
Still, the combination of intercultural gatherings and ethnic food is too much for me to pass up so I organized a dinner with a group of air force medical folks (Americans), TCN employees (mainly south Asians) and TCN management (Turkish) at a large Turkish contracting firm.
Essentially a Pakistani guy named Jay who cleans our section of the hospital was telling me about the food in his camp. I asked him to meet the boss  (Turkish) who came over to meet me at which point I told them I would bring the desert if they would provide the food. They said it would be an "honor" so I gathered 10 of my friends and we went to dinner.
The food was absolutely awesome!
Turkish salad and fish, Indian chicken,lamb rice and bread, and soft drinks. I brought an American desert--cinnabons!
We had an absolutely wonderful time!!!
The funny thing (if you can say "funny") is that as the US army has largely returned to the bases the folks who lob up the rockets have more room to maneuver. So we sat outside eating and talking while my radio periodically crackled about attacks on different parts of the base..but nobody seemed the slightest bit concerned. So our group of Hindus, Muslims, Jews (at least one) and Christians would not be deterred from our dinner together by remnants of Al Qaeda (or whomever was behind firing the rockets.)..so score one victory for intercultural (including Muslim)brotherhood over Islamic extremism!
It was nice to eat food outside our dining hall and learn about these folks who serve alongside us here in Iraq!
I gave my obligatory Pitt shirts to our hosts as we departed! 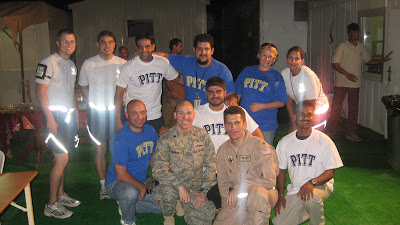