(This is the 11th dispatch from my friend Andy, an American doctor serving in Iraq with the Air Force Reserves)

Hello.
My time in Iraq has come within the 7 day mark and today I was surprised by a medal ceremony.
We went to a place called "Heroes Highway" which is the tunnel through which the medivac (helicopter) patients are brought through when they land outside the hospital enroute to the ER. Because the troops come in on their backs they lined the top of the tunnel with a huge American flag so it is the first thing they see before are wheeled into the emergency room. When I did medivac from Kirkuk I and passed through the tunnel I was always too intent on getting the patient to the ER to notice the symbolism of "hero's highway" which is where a huge portion of those killed and wounded here have traversed.
In any event I was called "urgently" to heroes highway for a "medical emergency' and found the command staff waiting for my arrival. I was somewhat confused when Col Lawrence (blonde woman in the pictures) said "Major Lobl, you have done a great job here and we want to acknowledge the tremendous work you have done for our troops." She presented me with the Iraqi Campaign Medal and the Air Force Expeditionary Service Medal. She then said that because of my "volunteer" forward deployment to Kirkuk and because my medivac (army helicopter) combat flights were unique and "above the call of duty" the 332 Medical Group (the med side of Joint Base Balad.) had submitted my name for the Air Force Achievement Medal which was approved by the "president" and was now at my home unit awaiting my return at a ceremony to be given at my home base.
Although I am under no illusion that I have done anything close to the troops who are here longer and spend more time outside the wire (defending me as I am generally helpless if attacked) it was quite an emotional experience standing under heroes highway surrounded by my friends and the brass and receiving the medal. I felt tremendous happiness that the ceremony occurring meant my time here was coming to a close so I can go back to my beloved Pittsburgh to see friends and family. I felt some sadness that I would never in my life unite with all these awesome people at the same time. I felt some trepidation about (as a reservist) going from an environment with unique bonding over a shared experience to a decidedly non-military community where my experience here would be extremely unique.
But most specifically I felt privileged to have been able to be given the opportunity to care for our soldiers and work with some of the most selfless team players I have met in my lifetime. It really is a thrill to serve our country.
But that being the case. I'm thrilled to come home 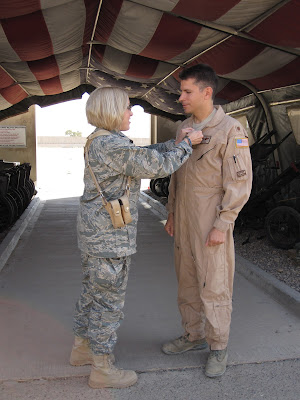