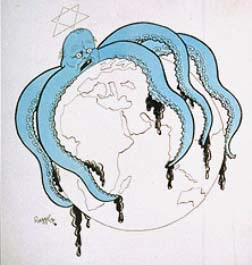 (This is cross-posted at Elder of Ziyon)

Nazi anti-Semitic caricatures during and preceding the Holocaust often portrayed Jews as an octopus-like creature, or some other beast – a category of anti-Semitism known as Zoomorphism. Such depictions would appear in official Nazi publications such as Der Sturmer. These cartoons would sometimes include images of a Jewish beast wrapping its tentacles around the world, representing the malicious control they were purported to exert on international affairs – consistent with anti-Semitic conspiracy theories codified in, among other sources, The Protocols of the Elders of Zion. Here is one such Nazi cartoon, circa 1938--An octopus with a Star of David over its head has its tentacles encompass the world.
Nazi, Soviet, and, more recently, Arab anti-Semitic caricatures often portray Jews as spiders, cockroaches, and Octopuses – dehumanizing Jews by turning them into animals that are destructive, inhuman and evil.


The cartoon below, by the notorious anti-Zionist cartoonist, Carlos Latuff, was posted on the “progressive” Jewish anti-Zionist blog, Mondoweiss recently – by a frequent Mondoweiss blogger named Seham – in reference to the Gaza flotilla incident.

This ugly caricature of the Jewish state manages to both employ Nazi-like anti-Semitic imagery of a beastly and monstrous Jewish collective while simultaneously asserting that the Jewish state has become the new Nazi Germany. (Note the Jewish Magen David on the Israeli flag is morphed into a swastika) Such insidious depictions of Israel and Israelis are mostly seen on extremist websites, and is a phenomenon known as Holocaust inversion. Indeed, narratives which characterize the Jewish state as morally equivalent to Nazi Germany have been codified as anti-Semitic by both the European Union[ii] and the U.S. State Department.


As Manfred Gerstenfeld noted, “The core motif of classic anti-Semitism was that Jews embody the most extreme malevolence. During the post-war era, the Nazi regime has become the paradigm for absolute evil. Comparing Israel's conduct to its actions is a new mutation of this ancient theme.” As historian Robert Wistrich has observed, “Anti-Zionists who insist on comparing Zionism and the Jews with Hitler and the Third Reich appear unmistakably to be de facto anti-Semites, even if they vehemently deny the fact! This is largely because they knowingly exploit the reality that Nazism in the post-war world has become the defining metaphor of absolute evil. For, if Zionists are "Nazis" and if Sharon really is Hitler, then it becomes a moral [indeed, “progressive”] obligation to wage war against Israel.”


Carlos Latuff is a Brazilian political “activist” and cartoonist with an impressively large portfolio of work – much of which openly express anti-Semitic themes. Some of his caricatures seem to suggest that Israel is a unique and immutable evil in the world. His work includes imagery frequently suggesting this moral equivalence between Israel and Nazi Germany – and he has explicitly acknowledged that this indeed his political view. Latuff's work has been posted on various radical left websites and blogs, as well as several terrorist affiliated websites such as 'The Islamic Front for the Iraqi Resistance' (JAMI) magazine, the Lebanese newspaper "Al Akhbar.". Norman Finkelstein's official website has featured Latuff cartoons[ix]. Latuff’s notoriety includes his participation in the 2006 Iranian International Holocaust Cartoon Competition - for his cartoon comparing the Israeli West Bank security barrier with the Nazi concentration camps. Latuff placed second in the contest.


Ian Black, writing for The Guardian, a newspaper not exactly known for its Zionist sympathies, noted that Latuff was among those cartoonists “drawing, without inhibition, on judeophobic stereotypes in the service of the anti-globalisation movement.”


Latuff also has employed racist themes in service of his critiques of President Barack Obama.
That such a cartoon would appear on the pages of Mondoweiss, funded by The Nation Institute, is, sadly, not particularly surprising to anyone familiar with the blog. Mondoweiss is an openly anti-Zionist Jewish blog and consistently advances, among other classical antisemitic tropes, the argument that Jews exercise too much power over U.S. policy and that Jewish “progressive” voices on the Middle East are censored by the organized Jewish community.

The viciousness and hatred towards Israel, and the state’s Jewish supporters, can’t be overstated. The main blogger, Philip Weiss, states that “Zionism privileges Jews and justifies oppression, and this appals me.” Weiss has complained that the “suffering of Palestinians that has been perpetrated politically in large part by empowered American Jews who are all over the media and political establishment.” He has openly called for a quota on Jews who work in the media. Weiss refers to Zionism as an ideology of “apartheid and ethnic cleansing.”


Weiss, like fellow liberal, Glenn Greenwald, demonstrating a bizarre left-right anti-Zionist alliance, also has contributed to Pat Buchanan’s paleo-conservative magazine, The American Conservative. Weiss’s alliance with Pat Buchanan seems quite consistent with the blogger’s frequent tropes suggesting the existence of an organized Jewish community so powerful as to render the U.S. President impotent to confront its mendacity. In one post, Weiss complains that the U.S. President’s desire to oppose Israel “colonization” has been “nullified politically because of the Jewish presence in the power structure.” He goes on to warn darkly that, “[One fifth] of [the U.S. Senate] are Jews, even though Jews are just 2 percent of the population. Over half of the money given to the Democratic Party comes from Jews. Obama’s top two political advisers are Jewish, Rahm Emanuel and David Axelrod. The news lately has been dominated by Obama’s aides Kenneth Feinberg and Larry Summers. And what does it mean that the Treasury Secretary gets off the phone with Obama to confer immediately with Lloyd Blankfein of Goldman and Jamie Dimon of Morgan (Dimon’s Jewish; Blankfein would seem to be)? As I have frequently said, the biggest money game in town on the Republican side is Sheldon Adelson, a Zionist Jew.”


Such a passage would suggest that the anti-Semitic cartoon posted by Mondoweiss blogger, Seham, isn't an anomaly. Weiss genuinely seems to see Jewish tentacles wrapped around the Obama Administration.


Weiss has even taken positions which seem to flirt with the political dynamic known as the Red-Green Alliance, as exemplified by British politician George Galloway. In one post Weiss openly expressed support for the terrorist group, Hezbollah. In addition to the group’s open and repeated call for the destruction of Israel, Hezbollah’s leader, Hassan Nasrallah, has a long and well-documented record of engaging in extreme expressions of anti-Semitism. He has stated, “If Jews all gather in Israel, it will save us the trouble of going after them worldwide.” He also said, "If we searched the entire world for a person more cowardly, despicable, weak and feeble in psyche, mind, ideology and religion, we would not find anyone like the Jew.” A few days before the Lebanese elections in 2009, Weiss said, “I hope Hezbollah wins….Nobody else seems to care for the poor people in Southern Lebanon.”


While Mondoweiss doesn’t have a fraction of the traffic of some of the more popular progressive blogs – such as Daily Kos and MyDD – it simply can’t be dismissed as a marginal voice within the progressive blogosphere. Its creators and contributors have posted on the most widely read blog in the U.S., The Huffington Post. Also, the influential Talking Points Memo (the 12th most popular political website[xxiv]), via its TPMCafe site, now syndicates Mondoweiss’s posts. The Nation Magazine, which funds Mondoweiss, has been one of the standard bearers of liberal Democratic thought for years, and is the 24th most popular political website overall.


New Israel Fund (NIF) – a powerful “progressive” foundation which purports to “work to strengthen Israel's democracy and to promote freedom, justice and equality for all Israel's citizens” – recently posted a link to an essay on Mondoweiss which praised NIF and their President, Daniel Sokatch. The Mondoweiss link appeared prominently on their home page, under their “NIF in the News” section. While NIF can’t be held responsible for what others write about them, it is curious that the foundation would at least appear to tacitly endorse such an openly and viciously anti-Zionist blog such as Mondoweiss. It also raises some serious questions about frequent claims by NIF and its progressive Israeli supporters that they are “vehemently opposed to [a one state solution], BDS and the broader delegitimization campaign against Israel” – positions which, NIF must be aware, are passionately championed by the bloggers of Mondoweiss.


One of the most inaccurate characterizations of Jews, like the bloggers at Mondoweiss, who routinely express contempt for their fellow Jews, and the Jewish state, is that they are “self-hating.” In fact, nothing could be further from the truth. The bloggers at Mondoweiss and their fellow political travellers see themselves as upholding Jewish ethical standards that have been abandoned by the vast majority of Jews in favor of what they would likely characterize as a crude and unenlightened desire to maintain the Jewish nation-state – an antiquated particularism which stands in opposition to what they see as their more “universal” moral values. Of course, no other national particularism other than Zionism seems to offend Mondoweiss’s belief in universalism – certainly not Muslim particularism, represented most clearly by the 57 nations who are members of the Organization of Islamic Conference – that is, 57 self-described Islamic states.


Philip Weiss is not a self-hating Jew. Rather, he is a moralizer who has described his anti-Zionism as consistent with the “great idealistic Jewish tradition.” As Anthony Julius has stated, “moralisers have a good conscience and is satisfied by his own self-righteousness. He is not a self-hater; he is enfolded in self-admiration. He is in step with the best opinion. He holds that the truth is to be arrived at by inverting the "us = good" and "other = bad" binarism. He finds virtue in opposing his own community. It is not enough for him to disagree, or even refute; he must expose the worst bad faith, the most ignoble motives, the grossest crimes."


The “Halo Effect” is a term generally defined as a cognitive bias whereby the perception of a person or group is influenced by the perception of another trait. Halo effects happen especially if the perceiver does not have enough information about all traits, so that he makes assumptions based on one or two prominent traits. This phenomenon has been used, by Professor Gerald Steinberg, to explain the tendency by many to blindly assume the benevolent intentions of NGOs – many of whom, says Steinberg, “appropriate [the moral] rhetoric of universal human rights to pursue highly particularistic, political and ideological goals, [and thus avoid] serious analysis and accountability.”


For genuine progressives, and committed anti-racists, the tendency to overlook the clear and unambiguous record of visceral hatred towards Jews and Israel routinely expressed by blogs such as Mondoweiss – due to their veneer of tolerance and universalism – represents another manifestation of the power of the “Halo Effect.” The failure of otherwise thoughtful and sober minds to closely re-examine this political façade represents an utterly appalling intellectual and moral abdication.


(Footnotes can be seen on Elder of Ziyon version of this post)
Posted by Adam Levick at 12:28 AM

Well-written piece, calm and cogent. And of course, 100% correct.

But I think the Jewish people needs some fire when confronting these horrific anti-Jew Jews. Mondoweiss is a sewer of hatred. I have read neo-nazi comments to pieces on Mondoweiss openly calling for the extermination of all Jews. The reaction of the Mondoweiss regulars? Firstly, they did nothing to ban or erase this filth; secondly they claimed it was not a real neo-Nazi but in fact an Israeli agent! - another ancient trope of anti-semitism, the all-powerful all-mutating Jews.

The Jewish community needs to boycott, picket, harass and sanction these anti-semitic Jews, and out them for the scum that they are. They are easily the most serious threat to the Jewish people on earth; I think it's not an exaggertion to say that without them non-Jewish anti-semitism would not be as vigorous nor would it have the fig leaf of their identities to hide behind.