The 2008 U.S. Presidential Election, and the meaning of American "Exceptionalism" 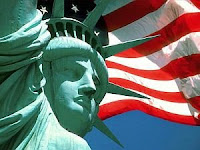 On the eve of the 2008 Presidential election, I had an essay printed in the Philadelphia Bulletin. The polemic essentially was an endorsement of John McCain for President, but it also represented much more. It was an attempt, in the short space I was allotted, to describe my move right politically - a slow political evolution which, as I pointed out, "caused much consternation among my friends, family, and colleagues."
Most importantly, I stated:

"My decision to support John McCain...is largely predicated on my belief that he is not tempted by the false moral equivalencies which equates our nation's faults with those of our enemies. Though Barack Obama is a decent and honorable man, he seems to lack the fortitude and moral clarity necessary to stand up to rogue dictators and wicked terrorists - a reluctance formed by a political culture seemingly unable to call evil by its name. "

Obama's Presidency has thus far confirmed my original fears not just about Barak Obama, but about an American left increasingly unable to distinguish the profound moral differences between the U.S. and its adversaries.
Obama's decision to remove the words "Islamic Extremism" from our nation's security doctrine (for fear, it seems, of offending the larger Muslim world), along with a general reluctance to clearly communicate the dangers posed by regimes - like Iran and Syria - who actively support (monetarily, militarily, logistically, and morally) the most odious terrorist movements in the world seems to stem from a national humility he seems to promote, and a general understanding of what it means to be an American, which is fundamentally at odds with what generations of Americans understood it to mean.
It is simply a fundamental truth that if the U.S. recedes militarily (and ceases to assert itself morally and diplomatically from the world stage) that power vacuum, by the immutable laws of international politics, will be filled other countries with far less benign intentions - whether its China, Russia, or Iran. Those paying the price of American abdication will likely be smaller democracies, or those struggling to be free - nations who could traditionally count on American moral and military support.
I also have moved far away from a new American left which goes far beyond the obvious truth that constructive criticism of your own country isn't necessarily unpatriotic to a profoundly distorted understanding which seems to suggest that criticism, no matter how extreme or incendiary, is synonymous with patriotism.
I said in my essay:

"America's critics have arrogantly declared her every fault and misstep as proof that she is not exceptional, not the single most powerful force for freedom. As Americans we are prone to self-criticism, but as realists we need to acknowledge that America's faults are small in comparison to her contributions. Our pride in being Americans is indeed well founded! While protest is clearly consistent with patriotism, it is unpatriotic to engage in gratuitous criticism completely divorced from any reasonable sense of balance or proportion."

"It is not enough to love a mere "ideal" of America, or some lofty abstraction disconnected from the actual place we call home. True patriots love the land, the mistakes, the rises and falls, the real history of an entirely human people, the particular, imperfect people of the United States."

Extreme criticism of our nation - incendiary, facile, and, often, out right juvenile rhetoric suggesting that the U.S. is uniquely racist, xenophobic, imperialist, etc. - saps the moral confidence of its people, and convinces them that they are not special, not uniquely qualified to fight for human rights and democracy around the globe.
The most telling moment of Obama's administration came when he was asked by a reporter whether he believed in the idea of "American Exceptionalism" - a term traditionally understood to refer to our long and exceptional record of defeating totalitarian movements, providing peace, prosperity, and human rights to its citizens to a degree unmatched by any other nation. The President's answer:

Such humility may seem admirable to some. But, really, could a nation possessing such humility have had the strength to defeat Nazism and Communism? It took a nation - whatever its very real flaws - with the strength of conviction, and a belief in its own moral righteousness, to muster the national will and courage necessary to defeat such profound threats to the values of peace and human freedom.
Would a United States in the 1940s crippled with self-doubt had the fortitude to launch the all-out assault on our enemies - which, after all, resulted in the deaths of hundreds of thousands of American soldiers, and even more enemy combatants (as well as tons of innocent civilians in those countries) - necessary for victory?
The threat posed by Islamic Extremism is certainly different in many ways than the threats of the past (for instance, its not represented by any single one state actor) - but one no less serious for those who take democracy and individual rights, and religious pluralism seriously. The stakes are so, so high.
Ronald Reagan once said:

"Freedom is never more than one generation away from extinction. We didn't pass it to our children in the bloodstream. It must be fought for, protected, and handed on for them to do the same."

Understanding, and thoroughly appreciating, the racially historic nature of Obama's Presidency, I was slow to express criticism, thinking that perhaps - despite his considerable ideological baggage - he would evolve and grow into the profoundly important office he was elected to. I hoped that, perhaps, he would, with every passing day, grow steadier, and begin to feel a greater ease with the projection of U.S. power necessary to achieve what are, after all, progressive objectives - amidst the intelligence information regarding the profound threats that he, as commander in chief - was uniquely privy to.
I'm still open-minded about his capacity to grow in office. But, I'm no longer optimistic. Living in one of those "small" democracies I mentioned above, one which is uniquely vulnerable to the myriad of threats represented by Islamic terrorists and rogue totalitarian regimes, I think I'm justified in my fears.
While, of course, as a nation, we are not perfect, and, true, not every moral, political and military decision is black and white. However, it is profoundly important to the future of freedom and democracy that we not allow such a sober understanding of the world to paralyze us and prevent us from making difficult decisions on the world stage, and from understanding the more fundamental truth about both the personal as well as the political: that the perfect is indeed the enemy of the good.
(Update on July 10, 2010: This new Gallup poll demonstrates the enormous divide between liberals and conservatives on the issue of patriotism - and provides empirical data to better contextualize mainstream Democratic and Republican views on this issue.)
Posted by Adam Levick at 6:19 PM

Adam, somehow I missed this post. It is interesting to me how much we agree on various Left/Right nuances, some of the very issues that led you Right and that put us in agreement on Israel, and how in contrast I remain firmly Left - could only have voted McCain with a gun to my head - and am not likely ever to support any Republican. We'll have to discuss all this some time, maybe in the context of those interview questions I will finally get to you one day.

Thanks for sharing your thoughts, Jay. Yeah, it sounds like we could engage in a very interesting exchange. My identity as a Republican was a process which took quite a long time to develop and, though I still disagree with the GOP on many issues, like I said, the perfect is the enemy of the good, and the ideological trends I see in the Democratic/Liberal movement scare me more than what I see on the Right.

Anyway, hope all is well with you.