This was published by my friend Adam Taxin at The Examiner.

Tonight, at 7:05 PM, the Phillies will play the first-place Arizona Diamondbacks at what will be not only "Jewish Heritage Night," but, presumably, will be the 200th consecutive sellout at Citizens Bank Park.
Guest commentary by Adam Levick follows: 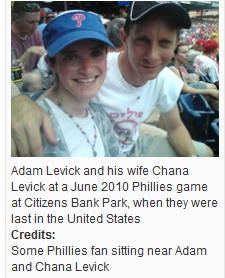 When I was growing up in Northeast Philly, baseball was not, for my family, simply a pastime.
My late father, upon returning home after four years serving in the Air Corps during World War II, pursued his dream of becoming a Major League Baseball player; eventually, he played in semi-pro leagues in the U.S. and Canada, before settling down, marrying my mother, and starting a family.

Through the ups and downs of everyday family life, baseball was a passion we all shared. My brother and I played ball in Little League and in high school and – especially through those tumultuous teenage years when fathers and sons are often at loggerheads – no matter what was going on, we could always watch the Phillies together and share in the team’s triumphs as well as their (all too often) defeats.

Even now in Israel, I still play a pickup game of softball every Sunday night at a park in Jerusalem with a bunch of fellow American olim [emigres].

However, although my aliyah [move to Israel] has been everything I hoped it would be – as I met the woman of my dreams and am now married, and I have an incredible job advocating for Israel – without question, the worst part of being in Israel (other than, of course, missing my friends and family) is not being able to anywhere near the 2011 Phillies, perhaps the greatest team, and certainly the greatest pitching rotation, in franchise history.

The time delay here makes it difficult to watch many games, and viewing it on MLB.com just isn't the same. I miss the ballpark, the smell of the grass, the excitement of the fans, the sound of the crack of the bat, and Crab Fries from Chickie’s and Pete's.

I love Israel with all of my heart, yet my affection for America has not waned; nor has my passion for the Philly team to which I’ll forever be loyal.