Deheisheh Refugee Camp, Revisited: "My enemy, enemy of the sun, I will not compromise and I will resist till the last pulse in my veins”

Back in July I posted an essay, on this blog, about a personal tour I was given of the Palestinian Refugee Camp near Bethlehem, called Deheisheh. In the post, I noted both the hospitality of our host, and others we met on the tour, as well as the disturbing messages, throughout the community, often displayed on public buildings, promoting violence and hate. Well, due to a show aired on Israeli TV alleging that other educational institutions at Deheisheh promoted such messages, Haaretz wrote a story about the issue - which was then picked up by the blogger, Elder of Ziyon. Since I took photos at the camp, I was able to provide Elder with an image which at least confirmed that such messages were certainly part of the Deheisheh landscape.

So, here's my blog post at CiF Watch on the incident.

UNRWA (UN Relief and Works Agency), it should be noted, was established by United Nations General Assembly 1949 as a temporary measure to carry out direct relief and works programs for Palestinian refugees. Not surprisingly, the overwhelming majority of their funding comes from the EU.

Research by NGO Monitor has demonstrated that such funds are often used for nefarious purposes:


UNRWA schools and other facilities are often used to teach hatred and encourage incitement; the evidence demonstrates that UNRWA staff allowed terror related activities in its camps.

The United Nations’ relief agency for Palestinian refugees, lashed out Tuesday at the Israel Broadcasting Authority for airing what it called a dishonest portrayal of the organization on Saturday in “Ro’im Olam” on Channel 1 television.

Right-wing journalist David Bedein's "For the Nakba", UNRWA said, contains numerous inaccuracies about its operations in Palestinian refugee camps and educational institutions. It depicts large graffiti that lionize Palestinian suicide bombers and includes an interview with Palestinian children who profess a desire to become "martyrs."

…Bedein [said] Palestinian kids…study the materials from the textbooks at a young age, and the mural of the suicide bomber was seen at the entrance of the UNRWA school at the Deheisheh refugee camp near Bethlehem.

…Prior to the airing of the show on Channel One, UNRWA’s [Christopher] Gunness wrote that, “UNRWA schools do not contain murals of suicide bombers.”

Elder then presented evidence which contradicts the denials by Gunness about UNRWA concerning the “Nakba” narrative by linking to an official UNWRA newsletter which indeed promotes the “Nakba.”

Elder does note, however, that he has no way to verify whether the specific institutions in question, at Deheisheh, contain such murals, nor whether the charges concerning school textbooks are indeed accurate. I, also, don’t have any specific information on the educational institution in question.

However, last year, I was taken on a personal tour of Deheisheh and took this picture at this UNWRA sponsored community center, near the entrance of the camp. 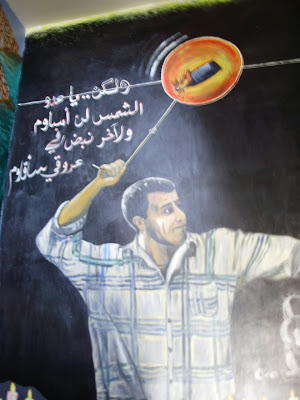 It should be noted that the community center where this very large mural appears, depicting a Palestinian who’s about to throw an explosive device, was filled with Palestinian children on the day I visited.

Perhaps Chris Gunness should visit such places before launching into expressions of outrage in response to future reports on UNRWA funds being used for incitement against Israel.

Per Elder of Ziyon, here’s an English translation of the Arab writing on the mural:

“My enemy, enemy of the sun, I will not compromise and I will resist till the last pulse in my veins”