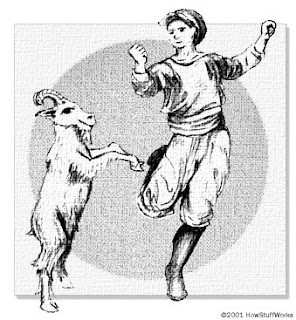 It is supposed that Ethiopians were the first to have discovered the energizing effect of the coffee bean plant. Once upon a time, or so the (mostly likely, Apocryphal) story goes, there was an Ethiopian goatherder named Kaldi. One day, as Kaldi was watching his herd, he noticed that some of the goats were eating the berries from a bush. After eating the berries, the goats became friskier and more excited. With a flash of insight, Kaldi made the connection between the berries and the extra energy his herd possessed. He gathered some of the berries and boiled them, producing a bitter concoction that had the benefit of warding off weariness. That is, it made him happy.
I recently concluded a temporary job at an espresso bar at the American Consulate, somewhere at a ''secure location'' in Jerusalem. As was the case in the U.S. before I finally landed a job with ADL, coffee retail, working as a Barista (a coffeehouse bartender of sorts) - pulling shots - will continue to be my fall back until I land a job in my field. I spent quite a few years, before I knew what my calling would be (in the professional wilderness) working full-time, both as a Barista and cafe manager - a career which began at the first Philadelphia Starbucks at the corner of 16th and Walnut St.
By 1475, the first coffeehouse opens in Constantinople. By 1600, coffee enters Europe through the port of Venice. The first coffeehouse opens in Italy in 1654.
My passion for coffee, and my interest in hanging out in coffee shops, started out quite simply. Back in college, I discovered it as a quick and inexpensive stimulant (like 50 cents at the machine) to help me stay awake when pulling those ''all-nighters'' when writing a paper or studying for finals. These occasional academically necessary perks - the procrastinator's best friend - evolved into an everyday custom, so that when espresso bars finally began to penetrate the Philly market I was quick to recognize both the superior quality of the beans they brewed, as well as how comfortable I felt taking in the coffeehouse culture - caffeinated coffee beverages being naturally conducive to reading, writing, and the political conversation that I so loved.
1607 Coffee is introduced to the New World by Captain John Smith, founder of Virginia at Jamestown. 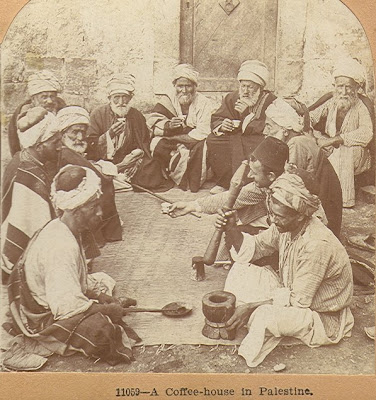 Though I only began really drinking coffee on a regular basis in my senior year of college, my father deserves credit for introducing me to the bitter black brew. Dad used to stop at a Northeast Philadelphia diner every day before work - where he spent a few precious moments before his daily grind - conversing with his fellow ''regulars'' at Linton's Diner on Roosevelt Boulevard. Though I only accompanied him to Linton's once - prior to him taking me to the office on a ''take your son to work'' day - knowing dad, the topics most likely discussed over coffee were politics (of the liberal variety) and sports (of the Philly variety).
I remember the coffee he'd drink at home on the weekends, that strange yet pleasurable aroma wafting through the house, and the first tentative sip he allowed me to take as a kid - which wasn't very agreeable to my young palate, and now, looking back, reminds me of the time my dad bought me a slim jim (beef jerky) and the utter disgust I felt upon tasting this strangely salty and cured beef product, consumed under the entirely false impression that it was some sort of chocolate!
The famous Boston Tea Party of 1773 began when a large shipment of tea was dumped into the Boston Harbor to protest the British tax on the product, proclaiming, ''no taxation without representation''. After that, drinking tea became unpatriotic. And, by 1900, Americans were consuming half of the all the coffee produced in the world.
At first I drank my coffee with cream and sweet 'n low (essentially a coffee flavored warm beverage, closer to ice cream than the actual bean) but then gradually began to appreciate the taste of actual coffee until - not too long after one of my cheeky friends suggested that ''real'' men don't add cream and sugar - I finally began to drink my brew black, uncorrupted by anything sweet or light.
Ín 1822 The prototype of the first espresso machine is created in France. 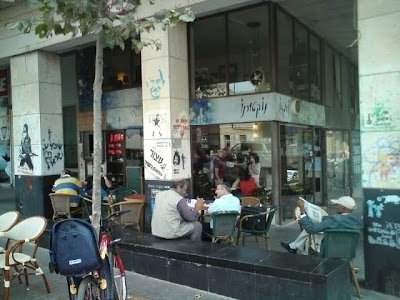 Espresso bar culture has totally penetrated the Jerusalem scene. In addition to quite a few chains, like Cafe Aroma and Cupa Joe, there are also lots of quality ''Indy'' espresso bars - most, unlike in the U.S., offering, in addition to coffee beverages and pastries, ''real'' food - freshly made (usually kosher) salads, sandwiches, etc - and, not too infrequently, alcoholic drinks, too.
My favorite Rehavia neighborhood espresso bar is Cafe Nocturno נוקטרנו. I've become somewhat friendly with one of the owners, Amit, and, as I've come to recognize over the years the difference between cafes who pay lip service to quality and those who actually work hard to get the espresso just right (which, for anyone who has ever been a barista will attest to, takes a lot of work and constant committment), I'm constantly impressed by Amit's passion for coffee and the resulting quality of his espresso.
1995 Coffee is the worlds most popular beverage. More than 400 billion cups are consumed each year. It is a world commodity that is second only to oil.
Today, I do much of my blogging, and various other forms of Zionist activism via the social media, at cafes with free WiFi such as Nocturno, downing shot upon shot of the expertly brewed blend, served in an appropriately warmed demitasse cup.
My love of drinking coffee continues, unfettered by the humorless killjoys who warn, as if by rote, of its injurious effects, of the ''danger'' posed by this ''narcotic'', of the ''necessity'' to switch to decaf (an idea which one anonymous writer quipped was like consuming a non-alcoholic Single Malt Scotch), while ignoring the most simple truth about why I, and millions of other passionate souls consume it: Its a simple, affordable pleasure that makes you happier and provides many who seek such inspiration with that vital creative verve. Coffee isn't just another beverage. Its a state of mind, a way of looking at the world.
Honore de Balzac, in "The Pleasures and Pains of Coffee", said:
This coffee falls into your stomach, and straightway there is a general commotion. Ideas begin to move like the battalions of the Grand Army of the battlefield, and the battle takes place. Things remembered arrive at full gallop, ensuing to the wind. The light cavalry of comparisons deliver a magnificent deploying charge, the artillery of logic hurry up with their train and ammunition, the shafts of with start up like sharpshooters. Similes arise, the paper is covered with ink; for the struggle commences and is concluded with torrents of black water, just as a battle with powder.
I think Kaldi the Goatherder would have enthusiastically concurred! 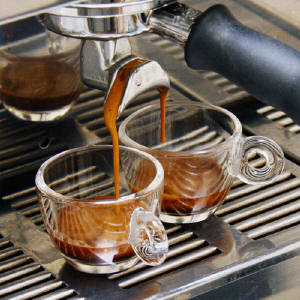 Balzac died of caffeine poisoning at the young age of fifty-one! I guess some people can take it and some can't - too much caffeine messes up my system completely.