Ethiopian Israelis, The Right of Return, & the Issue of Race 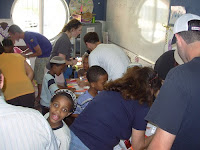 While spending the day volunteering in Beer Sheva with the Jewish Agency last week, we visited children at an Ethiopian Absorption center/school. While there we interacted with the children (actually helped them make small kites), and learned about the the unique challenges facing Ethiopian Olim through the years - a community that is now over 100,000 strong here, but whose integration into Israeli society has been hampered both by the vast differences between Ethiopian and and Israeli culture, as well as by lingering discrimination.
While there we heard from Micah Feldman, who gave us an overview of the efforts undertaken by Israel to rescue the Jews of Ethiopia. Feldman, quite the hero in the Ethiopian Aliyah movement, known as Abba Micha among his many Ethiopian friends, worked to facilitate Operation Moses, which brought 8,000 Ethiopian Jews to Israel, and was actually one of the chief engineers of Operation Soloman, which brought over an additional 14,000 Ethiopian Jews from Addis Ababa to Tel- Aviv.
Operation Moses was the mission which rescued Ethiopian Jews from Sudan during a famine in 1984 - an effort of the IDF, the CIA, the U.S. embassy in Khartoum, mercenaries, and Sudanese security forces. Begun November 21, 1984, it involved the air transport of some 8,000 Ethiopian Jews from Sudan directly to Israel, ending January 5, 1985.
Thousands of these Jews had fled Ethiopia on foot for temporary refugee camps in Sudan (who secretly agreed to take them in) but, once the story broke in the media, however, Arab countries pressured Sudan to stop the airlift and about 1,000 Ethiopian Jews were left behind. Most of them were evacuated later in the U.S.-led Operation Joshua. More than 1,000 so-called "orphans of circumstance" existed in Israel, children separated from their families still in Africa, until Operation Solomon took 14,000 more Jews to Israel in 1991.
In Operation Solomon, several Jewish organizations, including the state of Israel, concerned about the well-being of the sizable population of the remaining Ethiopian Jews (as the Ethiopian government was close to being topple), launched what would be the largest emigration of Ethiopian Jews to date. In only 36 hours, non-stop flights of 34 Israeli aircraft transported these 14,325 Ethiopian Jews to Israel.
While Israel, of course, has its flaws - and, indeed there are many Israeli NGOs, and individuals, working hard to increase opportunities for Israelis of Ethiopian background, and working to end the lingering discrimination which continues to hamper such progress - Israel's willingness to take immense political, economic, and military risks to rescue black Africans from poverty and war in one of the poorest and least politically stable regions in the world, and grant them immediate citizenship, is hard to reconcile with the facile narratives of Israel as a racist state.
In fact, Ethiopians weren't the only Jews of color who were rescued from harm in their 61 year history. Operation Magic Carpet was an operation between June 1949 and September1950 that brought 49,000 Yemenite Jews - as well as 500 Djiboutian and Eritrean Jews - to the nascent state. Today, Jews of color (Sephardi and Mizrahi Jews from Asia, Africa, the Middle East, and Latin America) actually account for over 50% of all Israeli Jews.
The fact is, you'd be hard-pressed to find any other ''progressive'' Western nation that has done anything even approaching what the Jewish state has done in rescuing black Africans from danger and granting them immediate citizenship - an eternal open-invitation, or sorts, for Jews all over the world, of any race, ethnicity, or economic status, to come and join our national family.
However, many people - even those who don't make the mistake of accusing Israel of racism as such - still have problems with the nature of Israel as a Jewish state, and ask, often quite innocently, why Israel must give immigration preference to those of Jewish descent, rather than to all, irrespective of their ethnic or religious background. To this, it is important to point out two things - first, that the historic mission of Israel (that is, one of its primary reason for being, is to be a refuge for Jews all over the world - as Herzl said, a state that would serve as the ''Guardian of the Jews'').
While we'll never know the precise number of Jews who would have been saved during the Holocaust if Israel had become an independent state a decade or so prior to 1948, one other thing is for sure. As even the more progressive and tolerant nations at the time only allowed a trickle of Jews to immigrate, sealing the fate of millions attempting to escape the Nazi onslaught, the existence of a sovereign Jewish polity - with the means: economically, militarily, and diplomatically to protect Jews at home and abroad - is no mere religious, abstract, or ideologically driven desire. Rather, it is a rational and pragmatic approach to ensuring the safety and well-being of a small minority who has understandably tired of relying on the good-will of the enlightened nations of the world to ensure its well-being, and indeed its very (individual and collective) survival.
The second point that needs to be made is the common misconception that Israel is at all unique in granting citizenship preference to certain groups - whether based on differences in religion, ethnicity, or some sense of shared history and/or people-hood - over others. For instance, there are 53 nations who belong to an international group known as the Organization of Islamic Conference - that is, nations who self-identify as Muslim states, most of whose citizenship laws codify preference towards Muslims over non-Muslims. 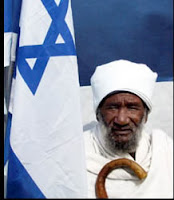 However, even in the democratic West, nations have citizenship laws that give preference to those can claim some historic, ethnic, or linguistic connection with their nation. Many countries provide immigration privileges to individuals with ethnic/familial ties to these countries (so-called ''leges sanguinis''). As examples: Bulgaria, Belgium, Estonia, Finland, Germany, Greece, Hungary, Iceland, Ireland, Japan, Poland, Romania, S. Korea, Spain, Turkey, and Ukraine, all have citizenship laws based partly or largely on this principle - that is, a Right of Return of sorts for people determined to share a preferred common national trait. Apart from France, ''jus sanguinis'' still is the
preferred means of passing on citizenship in many continental
European countries, with benefits of maintaining national unity (while not in any way necessarily denying equal civil rights for minorities within the country who have citizenship, but who don't share such traits).
So, in fact, Israel is not at all unique in seeking to maintain a nation unified by a citizenry who share a similar historical memory and a common sense of political & moral destiny. Moreover, it important to remember that Israel undertook such extraordinary efforts to grant citizenship to over 100,000 Ethiopian Jews due in part to the rulings, by Israeli authorities, that they are indeed Jewish despite the fact that, genetically, they are more similar to other non-Jewish Ethiopians than to Israeli Jews, giving credence to theories that such Ethiopians converted to Judaism somewhere in the past, and are not, indeed, descendants from the original Jewish tribes - that is, they don't share a ''leges sanguinis'' with other Jews.
The immigration of Ethiopian Jews - and other ''Jews of Color'' - over its 61 year history, is a lasting testament to the fact that race, as such, is not a consideration in determining who can become a citizen and contribute to the national enterprise of the Jewish people.

Interesting about the DNA distinctions; I had always assumed it was the other way around.

Wonderful entry! A friend of mine recently took my on a tour he's building about the history of Israel and Ethiopia starting with King Solomon and Queen Sheba. (It was fascinating, to say the least)

This is only a wiki entry, but I checked the footnotes and they seemed to be legit. Genetically, Ethiopian Jews are closer to other E. Africans than with other Jews.

Adam, many ashkenazim are closer to the various parts of Europe than they are too Israelites. Some Palestinians have DNA which s more "Jewish" than some Jews that have come to live in Israel, so what?

Where do you draw the line concerning who is "Jewish enough"? Jewish enough to be persecuted is that enough for you?

Also, these are not Ethiopian Israelis thats so insulting. They are Israelis of Ethiopian descent. Get it right. Israeli first and foremost.

Giles, one of the main points of my post was to refute the argument made by Israel's enemies that Israeli citizenship laws are unique in expressing a preference for one group over another. Nations all over the world do the same thing and (for some reason) aren't accused of ''racism''. As far as the term Israelis of Ethiopian descent, I agree that this is better and more accurate than Ethiopian Israelis.