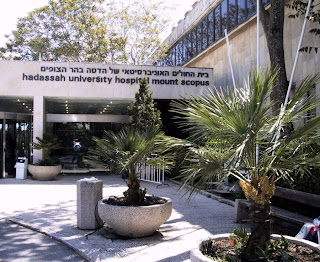 I'm now mostly recovered from hernia surgery, which was performed recently at Hadassah (Mt. Scopus) Hospital in Jerusalem. My injury occurred while playing softball - was rounding first base, felt something pull or tear, and knew right away that it was more than just a minor injury.
The care I received, from my surgeon to the nursing staff, was superb - and, indeed, prior to my surgery, the consensus among my family and friends was that, while they would have, of course, preferred for me to be closer to home so they could look after me while recovering from the operation, umm...how can I put it...they seem to suggest that...let's see...I'll put it like this...Jews aren't exactly strangers to the field of medicine and, well, they assumed that surgeons at one of the leading hospitals the Jewish state could, more than likely, handle my little hernia.
A brief history of the hospital: Hadassah was the first teaching hospital and medical center in Palestine, opened its doors in 1939, and quickly developed a reputation for providing medical services to all the communities in the region, providing modern medical care previously unavailable to the poorer classes amongst the Arabs.
In March 1947, as tension, and violence, in the region was mounting at the impending British withdrawal, the leader of the Arab Forces in Jerusalem, Abd al-Qadir al-Husayni, threatened to blow up the hospital and, though that didn't occur, attacks were carried out on traffic to and from the hospital - leading up to April 13, 1948 (about a month before Israel declared Independence), when an armored convoy of doctors, nurses, medical students, and other staff on its way to the hospital was ambushed, and 78 people were killed in what became known as the Hadassah medical convoy massacre.
Following Israel's War of Independence, under the 1949 armistice agreement with Jordan, Mount Scopus was declared a demilitarized zone and operation of the hospital became impossible. The staff moved to temporary quarters in Jerusalem and eventually, a new campus was built in Ein Kerem. After the unification of Jerusalem in the Six-Day War, Hadassah Mount Scopus underwent extensive renovations, reopening in 1975.
With over 300 beds and 30 departments and clinics, the hospital serves all populations in Jerusalem without distinction - treating thousands of Arab patients from East Jerusalem and the West Bank. (Indeed, while resting in my room, following surgery, I heard, at various times, nurses speaking to patients in Arabic, Hebrew, English, and Russian.) In conjunction with Hebrew Univ. Medical School, they have trained hundreds of medical personnel from Egypt, Jordan, sub-Saharan Africa and other parts of the world.
Hadassah now has a reputation as one of finest medical institutions in the Middle East and the world, pioneering in computer aided diagnosis, cardiac surgery, as well as embryonic stem-cell research (apparently, stem-cell research isn't at all controversial here, as it is in the U.S.). Hadassah has also become a pioneer in Terror Medicine and Mass Casualty Management, and has treated 40% of all terrorism-related victims in Israel since 2000. (Terror medicine is related to emergency and disaster medicine but focuses on the myriad of medical issues uniquely related to terrorist attacks.)
One final note, my surgeon, Professor Oded Zamir, happens to be on facebook, and apparently has a sense of humor, as would be indicated by his profile photo, below: 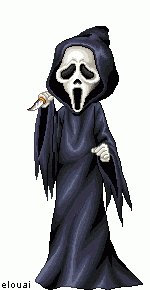 Dude... you're lucky! I spent over a week in an illustrious israeli hospital only to have the nurse leave the thermometer in my mouth while I fell asleep! My "roommate" called the nurse in thinking I was smoking (which isn't irrational if you consider the way Israelis smoke!). Glad things are going well with you!
Shana Tova!
Dalia